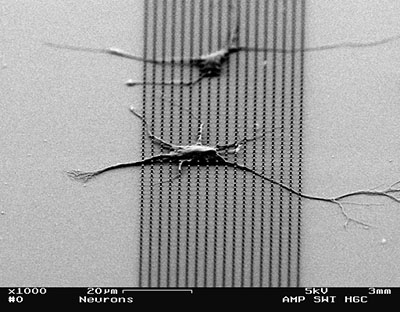 An agreement by the National Science Foundation (NSF) to fund a Cornell University-based consortium of institutions will help to establish the new Nanobiotechnology Center (NBTC) here. NSF funding over a five-year period could reach $19 million.

The authorization of the award to Cornell, Princeton and Oregon Health Sciences universities and to the Wadsworth Center of the New York State Department of Health will be coupled with support from the State of New York, industry, private foundations and Cornell University.

The funding of the NBTC -- as one of five new national science-and-technology centers to receive a total of almost $94 million -- was approved yesterday (July 29) by the National Science Board and announced by Deborah Crawford, program manager in NSF's Office of Integrative Activities. Program guidelines allow for financial commitments of up to $20 million each, but final awards are subject to negotiation between NSF and the lead institutions. The Cornell-based consortium had asked for $19 million.

Explaining a term that was coined at Cornell, NBTC Director Harold G. Craighead says "nanobiotechnology has the potential to breathe the life force of biological molecules into the silicon of electronic integrated circuits, while putting the ultra-small techniques of microfabrication to work in the study and manipulation of biological systems.

"Nanobiotechnology is the emerging area of scientific and technological opportunity that will meld nanofabrication and biosystems to the benefit of both," says Craighead, a Cornell professor of applied and engineering physics. "We are extremely pleased that the National Science Board shares our vision for the future."

In recognition of the importance of NBTC to the state of New York, Gov. George E. Pataki has committed up to $300,000 per year in matching funds to help foster interactions with industry and for work force education.

"New York's institutions of higher learning have always played a key role in growing, developing and advancing state-of-the-art technologies," Gov. Pataki said. "As upstate's economy continues to rebound, the addition of this new technology center at Cornell will help us firmly establish New York as a world class center for biotechnology research and development.

"The pledge of State support we made last year was instrumental in leveraging millions of additional federal funds into New York state for high-tech research and development," the Governor said. "This kind of investment will provide New York businesses with access to new technologies that will lead to improved products, new industries and highly skilled jobs for New Yorkers."

"We anticipate that nanobiotechnology will be the genesis of new insights into the function of biological systems and will lead to the design of new classes of nanofabricated devices and systems," says NBTC co-director Carl A. Batt, a Cornell microbiologist and professor of food science. "Accomplishing this will require a highly interdisciplinary collaboration among life scientists, physical scientists and engineers at Cornell and with our research partners," he says. Robert C. Richardson, Cornell vice provost for research, applauded the NSF's decision to base the new science-and-technology center at a university with a strong commitment to science education and outreach, as well as to advanced research. The center will be a resource for traveling museum exhibits, for curriculum development at the elementary and secondary school levels and for education of undergraduate and graduate students, according to Richardson, a Nobel laureate in physics and a professor in Cornell's Laboratory of Atomic and Solid State Physics.

"The educational process and breadth of training afforded students in nanobiotechnology," Richardson says, "will result in a new breed of scientists and engineers who will become the leaders of this emerging field."

NBTC will work in concert with two unique research programs at the university, the Cornell Nanofabrication Facility and the New York State Center for Advanced Technology (CAT) in Biotechnology.

Credit for the term "nanobiotechnology" goes to Lynn W. Jelinski, a biophysicist who until 1999 was the director of the Biotechnology CAT. The CAT was instrumental in the science and technology center proposal and will continue to play an integral role in the operation of the center. Now a professor and vice chancellor for research and graduate studies at Louisiana State University, Jelinski is the chair of the NBTC's external advisory board.

"Nano" refers to billionths of a meter, about the size of the smallest artificial structures that engineers can fabricate and the size of most biological molecules. At first, planners say, the new center will concentrate its research programs on six areas:

-- Microanalysis of biomolecules, with a goal of developing miniaturized sensor technologies with optical, electronic and chemical probes to detect and analyze small numbers of molecules in various matrices with high spatial resolution. This will allow the study of detailed functioning and response of cells and biomolecules to wide-ranging stimuli and also facilitate massive parallelism in analytic processes.

-- Molecular templates. The challenge is to explore novel ways of reliably producing patterned structures or controlled arrays of molecules for use as tools in investigating and controlling structural features and function of biological components and processes, as well as the interaction between specific molecular components in biological complexes.

-- Bioselective surfaces. The goal is to better understand the interactions between cells and surface chemistry and topography by using molecular templates to fabricate surfaces with site-specific chemistries and topographies.

-- Selective molecular filtration. This involves the fabrication of devices for biological assays by separating complex mixtures of molecules, sorting and then identifying the molecules and processes.

-- Sparse cell isolation. The challenge here is to develop microfabricated devices that can isolate a few specialized cells from large volumes of fluids containing unspecified cells, based on parameters such as size, deformability, optical properties and surface chemistry.

"We're beginning to see strong interest from industry, private foundations and New York state in supporting our vision," Craighead says. So far, a total of 13 industrial affiliates have joined NBTC. In addition to pledges of financial support over a five-year period, the industrial affiliates will serve as intern hosts for NBTC students and will help sponsor educational outreach projects.

Private foundation support is sought to help build and outfit the central facilities for the NBTC, according to Craighead. The center will be based in Duffield Hall, a multipurpose building being planned for Cornell's engineering quadrangle. Until its completion, nanobiotechnology research will be conducted in several laboratories around campus, including the Cornell Nanofabrication Facility's Knight Laboratory.

Over a five-year period, Cornell University will contribute $7.3 million in support to NBTC. Princeton, OHSU and Wadsworth together have committed a total of $652,000 in cost-sharing and an additional $1.5 million of in-kind support. Cornell's contribution will help purchase new equipment as well as provide start-up funds for new NBTC-related faculty, graduate tuition and fees, fellowships and administrative expenses.

Outreach programs will be directed initially to institutions in New York state and, through existing links with Clark Atlanta and Howard universities, to students throughout the United States. At Wadsworth in Albany, N.Y., summer institutes are planned for middle school and elementary school science teachers to develop hands-on curricular materials, including a science workbook for nanobiotechnology.

Students at Cornell will participate in research and education at the NBTC through the recently established biotechnology concentration or the graduate field of biomedical engineering. A new graduate-level course in nanobiotechnology, featuring nanofabrication with an emphasis on biological applications, will be developed by the NBTC faculty. Students at other universities, including those at NBTC-affiliated institutions, will join the classes via satellite teleconferencing.

Convinced that the emerging field of nanobiotechnology will need a diverse, globally oriented and well-trained workforce, NBTC planners say they hope to increase the numbers of participating women and under-represented minorities in science and technology. One such effort will be an undergraduate research experience program with a strong mentoring structure during the summer and academic year with participants recruited from a national pool.

"We intend to not only develop and carry out state-of-the-art research programs in this promising field," Craighead says, " but to ensure that the activities and discoveries of the center are effectively disseminated to the community, stretching from K-12 to our academic, industrial and government laboratory peers."

With the NSF funding and designation as a national science-and-technology center, NBTC will unite researchers in laboratories across the campus, Craighead notes. Among Cornell units initially involved in the nanobiotechnology thrust are the colleges of Arts and Sciences, Agriculture and Life Sciences, Engineering and Veterinary Medicine, as well as the New York State Agricultural Experiment Station at Geneva and the Boyce Thompson Institute for Plant Research.

The NSF established the Science and Technology Center (STC) program in 1987 to respond to a Presidential commitment to fund important fundamental research activities that also create educational opportunities. The program was also designed to encourage technology transfer and provide innovative approaches to interdisciplinary research challenges. From the first two competitions in 1989 and 1991, 23 STCs were still in operation before the current additions authorized by the National Science Board.