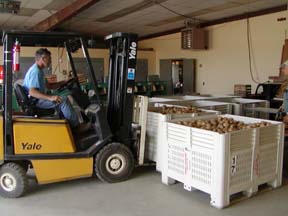 Provided
Steve McKay, manager at Cornell's Homer C. Thompson Research Farm in Freeville, takes up a bin of potatoes for transport to the Food Bank of the Southern Tier. The potatoes are among 81 tons of produce donated by the Cornell farm.

This harvest season, families across the Southern Tier have received 81 tons of fresh fruits and vegetables thanks to faculty and staff at Cornell University's Homer C. Thompson Farm in Freeville.

Bushels of fresh-picked tomatoes, sweet corn, potatoes, plums and melons were among the donations from the farm to food pantries associated with the Food Bank of the Southern Tier. The produce came from Cornell researchers who concluded their growing projects during harvest time this fall.

"Amazing," says Mark Rockwell, warehouse logistics coordinator for the food bank. "The effort that Cornell put into it, the effort of the guys in the field … It's the best quality produce you can find. To find something like that is great all the way around." This year's harvest also included cabbage, cantaloupe, dry beans, green beans, onions, pumpkins, red beets and squash.

From August through early November, researchers and farm staff donated nearly 163,000 pounds – or 81 tons – from the farm. The produce was grown in support of research projects in the College of Agriculture and Life Sciences, whose land-grant mission includes advancing a productive and sustainable agriculture and supporting a safe, secure food supply. The crops were produced using conventional and organic growing methods.

This season marked the second year the Food Bank of the Southern Tier received the produce. But, says Steven P. McKay, manager of the Freeville farm, it was the first year that practically all researchers – 13 faculty members from six departments – contributed to the harvest and made use of new 20-bushel bins. These facilitated the retirement of the more tedious process involving smaller, wooden bins and plastic wrap, McKay says. Last year, researchers donated more than 90,000 pounds to the food bank, which later awarded the Department of Horticulture a "Donor of the Year" award.

Robin Bellinder, professor of horticulture, started the donation effort in the late 1990s, when the quantity of produce generated by her research projects on large plots of the farm persuaded her to do more than "just throw this stuff away."

At first, donations went to a food bank in Syracuse, and the farm was opened to people to collect the crops themselves. A desire to protect ongoing projects and better benefit local communities led to the connection with the Food Bank of the Southern Tier. The organization serves six area counties including Tompkins. The food bank also distributes donated seed and cut potatoes and maintains connections with children's garden projects in its constituent counties. Of the 27 agencies connected to Tompkins County's food distribution network, 17 received a collective 18,148 pounds of the produce donated by the Cornell farm this year, says Crissy White, warehouse administrative operations coordinator of the food bank.

"There have been many tragedies this year, from earthquakes to tsunamis to hurricanes, to which many have responded with generous donations. However, this has come at the expense of contributions to local charities who address needs that usually do not involve life and death, but are important nonetheless," says Marvin Pritts, chairman of Cornell's horticulture department. "So, our food contributions help meet the local need."

Yet despite the strain on local food pantries and New York state's eight major food banks that supply them, in Tompkins County, from January to September this year, the food bank helped service approximately 22,565 households, or about 1,900 monthly. That was up from 20,000 households, or roughly 1,600 monthly, in the same period a year ago.

"It's been an exciting and good way to connect with everyone on the farm," says Betsy Ingall, research technician for the horticulture department, speaking for faculty and staff . "We feel like we're really doing something. Rather than throwing [the produce] away or composting it, we're giving it to folks who really need it."