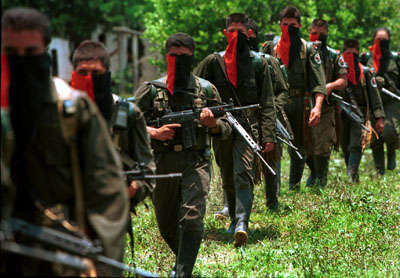 Marcelo Salinas
Up to 20,000 children in Colombia (above) -- and 300,000 children worldwide -- have been coerced into serving in militias, providing an endless supply of cheap and disposable soldiers, which prevents peace-making in many countries, say Cornell sociologist Charles Geisler and graduate student Niousha Roshani.

As long as children continue to be coerced into militias -- as they are by the thousands in Colombia, Sudan and dozens of other countries -- peace talks in those countries to settle armed conflicts are unlikely, assert two Cornell University researchers.

"The endless supply of adolescent soldiers is an unfortunate source of energy for warfare and, we think, a poorly understood obstacle to peace-making in many countries," said Charles Geisler, professor of development sociology at Cornell. 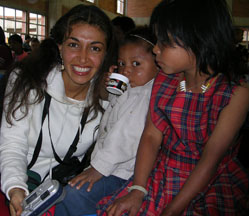 Roshani, who interviewed displaced families in Colombia and then scoured many sources to assess the extent of the problem, said that warfare in that country has been displacing families for three generations.

"Displacement usually means a series of calamities for children -- homelessness, physical torture, severe trauma, malnutrition, little formal education, loss of family members and exposure to atrocities," said Roshani, an Ivory Coast citizen who has been working with Colombia's Consultancy for Human Rights and Displacement and is now planning a documentary film about Colombian child soldiers.

Nearly half of the displaced people in Colombia are children. They come from "socially invisible" Afro-Colombian and Indian populations, said Geisler, as well as from diverse farming communities disrupted by the country's ongoing drug war. Colombia has more displaced persons than any other country except Sudan. This includes up to 20,000 children -- many younger than 14 years of age -- who are military combatants. They make up about 25 percent of the various militias in that country.

Worldwide, some 300,000 children are bearing arms in more than 30 conflicts, according to Youth Advocate Program International. The organization reports that up to 90 percent of all casualties in these conflicts are women and children, and that from 1986 to 1996 more than 2 million children were killed and more than 6 million seriously injured in armed conflicts around the world.

Roshani and Geisler offer a series of recommendations on how to reintegrate displaced children into society, both for their own sakes and to accelerate the peace process. Their suggestions range from providing legal support, education and safe havens to establishing a permanent commission to protect children and educate them about their civil rights.