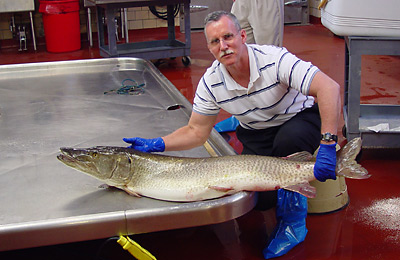 Provided
Paul Bowser, Cornell professor of aquatic animal medicine, holds a muskellunge found dead in the northeastern waters. The fish is one of many undergoing tests at Cornell to detect a deadly viral hemorrhagic septicemia virus (VHSV) spreading in the Great Lakes.

Cornell researchers have found that a deadly fish virus detected in the northeastern United States for the first time in June in two species has probably spread to at least two more. But they have yet to determine whether the virus is responsible for the death of hundreds of fish in Lake Ontario and the St. Lawrence River in recent weeks.

Over the past month, Cornell's Aquatic Animal Health Program at the College of Veterinary Medicine has been sent some 300 fish for evaluation. The frozen samples are from the fish that have been dying since late May and early June in Lake Erie, Lake Ontario and the St. Lawrence River. Last week, an estimated 1,000 dead fish washed up on the shores of Lake Ontario in just one morning.

Viral hemorrhagic septicemia virus (VHSV) was detected and confirmed for the first time in the Northeast in round gobies and muskellunge in June. Cornell researchers are awaiting final results of tests on 54 fish of 10 species that indicated VHSV in smallmouth bass and burbot. To date, Cornell researchers also have tested for the virus in lake sturgeon, brown bullhead, rock bass, yellow perch, pumpkinseed and black crappie.

VHSV causes fatal anemia and hemorrhaging in many fish species but poses no threat to humans or other animals.

"The situation right now is that we still have fish dying in Lake Ontario," said Geoffrey Groocock, a postdoctoral associate at Cornell's Aquatic Animal Health Program.

"We have detected the virus in other fish species in the region, which may be contributing to the continuing fish mortalities. We are continuing to test samples as we receive them from the New York State Department of Environmental Conservation (DEC) and State University of New York College of Environmental Science and Forestry Thousand Island Biological Field Station to try and get a clearer picture."

The researchers are using a classical cell culture technique to perform the initial stage of the diagnostic testing. This technique can take many weeks to months to yield results. Cornell researchers are developing a molecular-based test for VHSV based on a specific gene sequence in the virus. Once available, the new technique will cut the turnaround for confirmation to three to five days.

Groocock said the high number of reports of dead fish recently may be due to the increased presence of vacationers on the lakes in summer, as well as the increased awareness since reports of mortalities earlier in the season. Also, recent storms and heavy winds may have washed up more fish from deeper waters. Groocock added that while more species of fish are dying, absolute numbers of fish mortalities do not appear to be changing.

"There is no cure for VHSV in fish in an ecosystem as large as the Great Lakes Basin. Given this, it is likely that management practices designed to limit the spread of the virus will be put in place," said Groocock.

VHSV was first reported in 1988 in the United States in spawning salmon in the Pacific Northwest. It was reported in North American freshwater fish in 2005 in muskellunge in Lake St. Claire, Mich., and in freshwater drum from the Bay of Quinte, Lake Ontario, Canada.