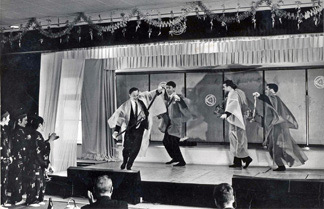 Provided
1966 Glee Club director Thomas Sokol, left, takes the lead performing a ritual Japanese dance at the Tea House of the August Moon in Okinawa during the group's historic tour of Asia 40 years ago. The men will perform together for the first time in four decades at the Glee Club's annual Homecoming Concert Oct. 14.

They were singers once … and young. Actually, most of them are still singing -- and now the 1966 Cornell Glee Club members are together again. Forty years after their legendary concert tour of Asia, 32 Glee Club alumni from 1966 will perform at the group's annual Homecoming concert, Saturday, Oct. 14, at 8 p.m. in Bailey Hall. Tickets are available through the Cornell Glee Club Web site or at the door.

Thomas Sokol, Cornell professor of music emeritus and director of the 1966 group, will lead the reunited singers in a recreation of several songs they performed on their historic 90-day tour. The alums also will join current Glee Club singers under the baton of Scott Tucker, Cornell choral music director, for an intergenerational songfest.

The 1966 Cornell Glee Club was selected and sponsored as goodwill ambassadors to Asia by the U.S. State Department's now-defunct Office of Cultural Presentations. Forty-one choristers were chosen from the 120-member chorus and granted deferments for the entire semester, in absentia, so none would be drafted for service in Vietnam while on tour.

Adam Perl '67 recalls the trip as "a triumph musically, culturally and personally for the Glee Club. The experience and knowledge gained profoundly affected each and every one of the men who participated."

The group performed in 10 countries in 10 different languages, and they sang the national anthem of each plus two traditional folk songs from each nation. In Sri Lanka (then Ceylon) a recording of the Glee Club's arrangement of the national anthem, "Sri Lanka Matha," was so highly regarded that it opened each broadcast day on Sri Lankan state radio until the late 1980s.

The 1966 Glee Club members traveled light, but their repertoire was staggering: three separate concert programs all sung from memory, plus the anthems and folks songs.

"We performed a tremendous number of concerts," said Sokol. "We performed in concerts alone and jointly with other groups. We sang on national television programs and radio broadcasts -- in fact, the audience for the entire tour was estimated at about 100 million. Pretty good numbers for those days."

The group performed in Hong Kong, Singapore, South Korea, Japan, the Philippines, Malaysia and Taiwan, among other locations. A Taiwanese general who saw a performance on television flew the entire Glee Club aboard a C-119 cargo plane to the island of Kimoy for an impromptu concert before his staff and troops in "a huge underground auditorium hewn out of the rock," said Sokol -- they were just 10 miles away from forbidden mainland China. "The acoustics were a little different for us, but we adjusted."

Perl recalled a different moment in territories north of Hong Kong when Glee Club members decided to vocalize in an open field near a brickworks while waiting to perform a concert.

"People just stopped doing what they were doing -- workers put down their tools, children stopped playing -- and they came over to listen," he said. "We encountered many new people, places, cultures, customs and foods, but music was the universal language that united us all."

He said the group was "well received wherever we went, and a lot of the men wound up involved with the Peace Corps or working and/or teaching in Asia as a result."

One member even found his soul mate on the tour and later married her.

As for the upcoming concert, Sokol said he was pleased to learn that a number of the Glee Club alums "are still actively singing. … My guess is they'll be in reasonably good shape going into rehearsal," he said.

Perl added: "We will be performing together for the first time in many, many years with just two days of rehearsal. But for many of us, the music we sang 40 years ago is forever etched in our hearts."