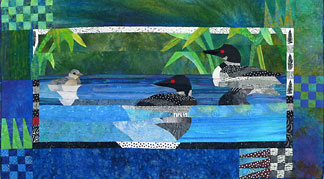 Lab of Ornithology
This quilt by Elise Dentes depicts loons.

Birds take center stage in the work of local fiber artists Elsie Dentes '77 and Alice Gant in a new exhibition of quilts and banners -- "Oh Joy! Oh Raptor!" -- on display through April 2 at the Cornell Laboratory of Ornithology.

The works capture Dentes' and Gant's delight in avian beauty. Dentes' pieced and quilted pictures show eagles, loons and herons in naturalistic surroundings delineated by craftsmanlike stitches. Gant scatters birds like leaves across her banners, tucking them in where they will do the most compositional good. Her reverse appliqué technique enables her to imply volume in the figures she creates.

Dentes, an Ithaca native, is a graphic designer and illustrator. She began piecing quilts in high school, and her interest and knowledge intensified when she worked at the Museum of American Folk Art in New York City from 1979 to 1985. She draws inspiration from the natural world, and the Adirondack Mountains in particular.

"Nature abounds with fascinating shapes and patterns," Dentes says in her artist's statement. "The interplay of light and shadow captivates and challenges me to interpret them into visual fabric compositions."

Gant curated a 2004 show of quilts at the Women's Interfaith Institute in Seneca Falls and has shown her work at the Tompkins County Public Library and Moosewood restaurant in Ithaca, Visions Gallery in Albany and the Cayuga Museum in Auburn.

The lab also is showing a selection of avian images on pre-Columbian pottery and other artifacts drawn from the Carroll Collection, a recent gift to the Herbert F. Johnson Museum of Art that will be shown at the museum later this spring.