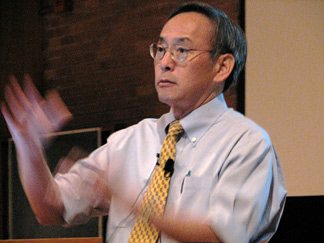 Chu delivered the 2008 Hans A. Bethe lecture, titled "The World's Energy Problem and What We Can Do About It," to a standing-room-only audience in Schwartz Auditorium April 16. It was his third lecture in three days at Cornell; he also delivered a colloquium on frontier questions in cell biology and a seminar on contemporary work in ultracold materials.

The energy problem is complex and far-reaching, Chu said, with consequences that could have impacts on national security, economic prosperity and global climate change.

Many of the effects of climate change are already well documented, he noted, citing melting ice in the arctic north and dying forests in California. And severe global water shortages are likely to come next -- unless individuals and governments worldwide take a systems approach that includes efficiency standards, carbon-neutral renewable energy and more equitable energy distribution across the globe.

"Free market forces aren't going to do this," he said. "You really need a combination of fiscal policies and downright regulations, and it has to be international. And above all, we need to put a price on carbon without any loopholes. People in the U.S. especially are working very hard to keep it below $20 per ton -- and then have additional loopholes -- because at that price you actually don't have to change anything."

Efficiency is also key, he said, noting that in California, "smarter" buildings and rigorous efficiency standards for appliances, among other efforts, have made a significant difference.

On the renewable energy front, such carbon-neutral sources as wind, solar, geothermal and hydroelectric are being more widely used in areas with the respective natural resources -- but storage and transmission challenges remain. Chu attributed this in part to the United States' lack of a national policy on energy transmission. "Without such a policy you can never move energy over thousands of miles from the Arizona desert to Cornell; or from wind farms {to more densely populated areas]," he said.

Meanwhile, researchers are searching for ways to convert the woody cellulose in eco-friendly crops like switchgrass into biofuels -- and looking to the microbes in termites' digestive systems, which accomplish that task naturally, for guidance.

The most successful strategies, Chu said, will be those that take inspiration from nature and combine it with human ingenuity.

Quoting William Faulkner, he said, "I believe that man will not merely endure: he will prevail. He is immortal, not because he alone among creatures has an inexhaustible voice, but because he has a soul, a spirit capable of compassion and sacrifice and endurance.

"With these virtues, the world can and will prevail with this energy challenge," Chu added.

He closed with an image taken from the orbiting Apollo 8 spacecraft in 1968: the swirly, blue-and-white Earth rising above the barren, crater-pocked moon. "There is nowhere else to go," he said.

The annual Bethe Lectures, which honor the late Cornell professor emeritus and Nobel Laureate Hans A. Bethe, were established in 1977 by the Cornell Department of Physics and the College of Arts and Sciences. Bethe came to Cornell in 1936 and was awarded the Nobel Prize in 1967 for his description of the nuclear processes that power stars.