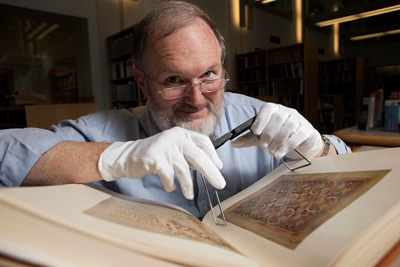 Lindsay France/University Photography
Professor John Cisne looks at a facsimile of folio 85v in "The Book of Durrow," a manuscript with microscopically detailed illumination.

The Book of Kells and similarly illustrated manuscripts of seventh- and eighth-century England and Ireland are known for their entrancingly intricate artwork -- geometric designs so precise that in some places they contain lines less than half a millimeter apart and nearly perfectly reproduced in repeating patterns -- leading a later scholar to call them "works not of men, but of angels."

But behind the artwork's precision is a mystery: How did illustrators refine the details, which rival the precision of engravings on a modern dollar bill, centuries before microscope lenses were invented?

The answer, says Cornell paleontologist John Cisne, may be in the eyes of the creators. The Celtic monks evidently trained their eyes to cross above the plane of the manuscript so they could visually superimpose side-by-side elements of a replicated pattern, and thereby create 3-D images that magnified differences between the patterns up to 30 times.

The monks could then refine any disparities by minimizing the apparent vertical depth of the images -- ultimately replicating the design element to submillimeter precision. Cisne proposed the idea in the July 17 issue of the journal Perception (Vol. 38, No. 7).

The paper suggests that the technique, called free-fusion stereocomparison, which takes advantage of the brain's ability to perceive depth by integrating the slightly different views from each eye, was known nearly a thousand years before it was articulated by stereoscope inventor Sir George Wheatstone in the 19th century.

Cisne analyzed the most detailed illuminated manuscripts of the Middle Ages, created between 670 and 800 A.D., including the Book of Kells (circa 800 A.D.). Some have as many as 30 lines per centimeter. 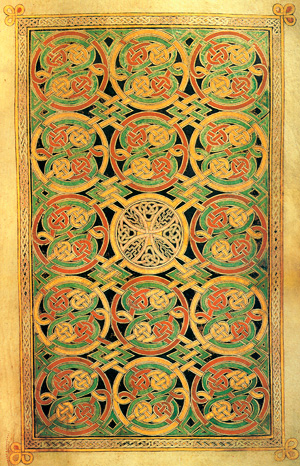 Provided
Detail of folio 85v of "The Book of Durrow"

The artists stayed mum about their techniques, possibly because their talent gave their Celtic church an edge over the Roman church in the competition for disciples. "If you're in the middle of a propaganda war, [it helps] if the angels are clearly on your side," Cisne said.

But they left a few clues, he said, including the high degree of symmetry and repetition among many of the most intricate patterns and the elements' spacing, which is usually at about the distance between an average person's pupils.

"It turns out that if you can draw accurately enough, you can easily get a magnification of the lateral [horizontal] distance something like 10, 20 or 30 times -- about the magnification you could get under a dissecting microscope," Cisne said.

The monks likely created a highly accurate template for the design elements by drawing the same element repeatedly, comparing versions and modifying to create a standardized model. From there, they could replicate it into complex designs, using free-fusion stereoscopic comparison and minimizing errors along the way.

Many of the design elements contain minute imperfections that are consistent throughout rows or columns, supporting the idea that the monks worked from templates. And depictions of scribes from the era often show the monks holding pen in one hand and erasing knife in the other -- another clue that they made modifications along the way.

"The idea is that these guys did it just the same way I do when I use a drawing tube and a microscope -- lay down a reference grid, fill in the details, and then compare the details with your template," Cisne said.

Their knowledge of stereoscopic imagery likely died with the monasteries, which were later decimated by the Vikings, Cisne said. The original manuscripts are in Dublin and London; Cisne worked from high-quality reproductions in Cornell's Division of Rare and Manuscript Collections in Kroch Library. They're a reminder, Cisne said, that ingenuity can sometimes trump technology.

"Most people don't appreciate what a fine instrument they have in their eyes," he said, "and how their visual system can be used in other than the obvious ways."