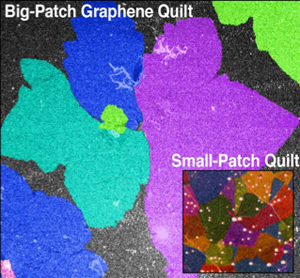 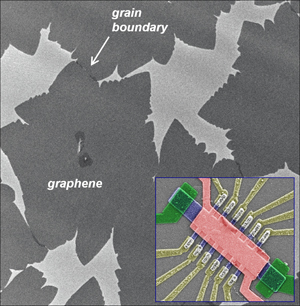 Wei Tsen/Park lab
A scanning electron microscope (SEM) image of graphene crystals growing on copper. The inset is a false-color SEM image of an electrical device consisting of a single grain boundary in graphene.

Similar to how tighter stiches make for a better quality quilt, the "stitching" between individual crystals of graphene affects how well these carbon monolayers conduct electricity and retain their strength, Cornell researchers report.

The quality of this "stitching" -- the boundaries at which graphene crystals grow together and form sheets -- is just as important as the size of the crystals themselves, which scientists had previously thought held the key to making better graphene.

The researchers, led by Jiwoong Park, assistant professor of chemistry and chemical biology and a member of the Kavli Institute at Cornell for Nanoscale Science, used advanced measurement and imaging techniques to make these claims, detailed online in the journal Science June 1.

Graphene is a single layer of carbon atoms, and materials scientists are engaged in a sort of arms race to manipulate and enhance its amazing properties -- tensile strength, high electrical conductance, and potential applications in photonics, photovoltaics and electronics. Cartoons depict graphene like a perfect atomic chicken wire stretching ad infinitum.

In reality, graphene is polycrystalline; it is grown via a process called chemical vapor deposition, in which small crystals, or grains, at random orientations grow by themselves and eventually join together in carbon-carbon bonds.

In earlier work published in Nature last January, the Cornell group had used electron microscopy to liken these graphene sheets to patchwork quilts -- each "patch" represented by the orientation of the graphene grains (and false colored to make them pretty).

They, along with other scientists, wondered how graphene's electrical properties would hold up based on its polycrystalline nature. Conventional wisdom and some prior indirect measurements had led scientists to surmise that growing graphene with larger crystals -- fewer patches -- might improve its properties.

The new work questions that dogma. The group compared how graphene performed based on different rates of growth via chemical vapor deposition; some they grew more slowly, and others, very quickly. They found that the more reactive, quick-growth graphene, with more patches, in certain ways performed better electronically than the slower growth graphene with larger patches.

As it turned out, faster growth led to tighter stitching between grains, which improved the graphene's performance, as opposed to larger grains that were more loosely held together.

"What's important here is that we need to promote the growth environment so that the grains stitch together well," Park said. "What we are showing is that grain boundaries were a main concern, but it could be that it doesn't matter. We are finding that it's probably OK."

Equal in importance to these observations were the complex techniques they used to make the measurements -- no easy task. A four-step electron beam lithography process, developed by Adam Tsen, an applied physics graduate student and the paper's first author, allowed the researchers to place electrodes on graphene, directly on top of a 10 nanometer-thick membrane substrate to measure electrical properties of single grain boundaries.

"Our technique sets a tone for how we can measure atomically thin materials in the future," Park added.

Collaborators led by David A. Muller, professor of applied and engineering physics and co-director of the Kavli Institute at Cornell for Nanoscale Science, used advanced transmission electron microscopy techniques to help Park's group image their graphene to show the differences in the grain sizes.

The work was supported by the Air Force Office of Scientific Research, and the National Science Foundation through the Cornell Center for Materials Research. Fabrication was performed at the Cornell NanoScale Science and Technology Facility.