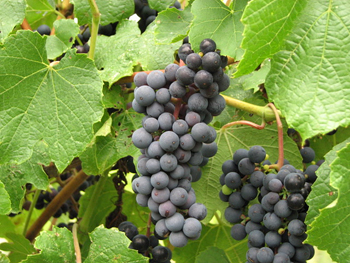 Cornell scientists are asking the public for names for two new wine grape varieties that will be released from their breeding program in 2013.

The two latest varieties from grape breeder Bruce Reisch include a cold-hardy white wine grape and an innovative organic dark red. The first conjures up citrusy aromatic characteristics; the second has a hint of blueberry. Their current names -- NY76.0844.24 and NY95.0301.01-- are far from inspiring.

Reisch hopes that a contest and social media campaign will help change that. He is accepting name submissions at bruce.reisch@cornell.edu until Aug. 6. The winning names will be revealed at the Viticulture 2013 conference in Rochester, Feb. 6-8.

His efforts have been fruitful so far. An appeal through the national cooperative extension network has already garnered nearly 100 entries from around the world, including Australia and Scandinavia. The ironclad disease resistance of NY95.0301.01 has inspired several variations on an armor theme, for example, while a devoted alumnus suggested that some Cornell hockey hall-of-famers would be appropriate namesakes for the cold-hardy NY76.0844.24. 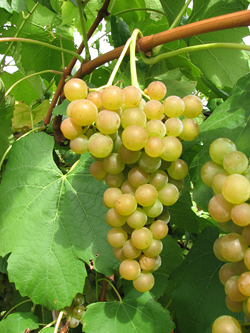 Just as there's a science to developing a great grape that combines quality with disease resistance and temperature tolerance, there is much to consider when naming it, he said. Not only must the name be unique -- a challenge with some 7,000 other grape varieties -- it must also be marketable, reasonably easy to pronounce and conjure positive connotations, Reisch said. Names that are foreign-sounding or similar to well-loved varieties are popular, a combination that has worked for Noiret, a wine grape released by the Cornell breeding program in 2006.

Reisch recently renamed another Cornell grape that has become popular in blended wines. GR7, released in 2003, once part of a series of eight red wine grapes tested by grower-cooperators in the 1960s and '70s, is now known as Geneva Red.

It often takes 30 to 40 years before new varieties are ready for release and a few more years before those grapes appear in commercially available wine.

Dark red NY95.0301.01 was developed in 1995 and was fast-tracked into production because of its promise as an organic variety. The first grape to be released from the "no-spray" vineyard, it has good resistance to downy and powdery mildews. Reisch said it exhibits moderate body, good structure and blueberry flavor on the palate.

NY76.0844.24 was first created in 1976; this white grape variety ranks high for winter hardiness and productivity, with excellent wine quality and aromatic characters reminiscent of Gewürztraminer or a citrusy Muscat, he said.

The Cornell grape breeding program, which has released 56 cultivars since 1888, has many new varieties under development. Cayuga White, released in 1972 as the program's first wine grape, now accounts for more than $20 million of wine production in New York annually, and the hybrid Traminette has become the signature wine of Indiana.

Reisch hopes the contest will create some buzz about other emerging varieties, which often face uphill battles when it comes to marketing.

"There are so many different flavors. Why shouldn't people get excited about new varieties? They keep things interesting for the consumer and are often better for growers," he said.

For information on licensing Cornell grape varieties, contact Jessica Lyga at the Cornell Center for Technology Enterprise and Commercialization at jml73@cornell.edu or 607.255.0270.