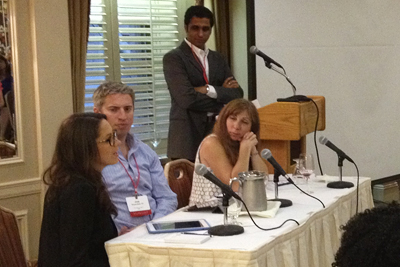 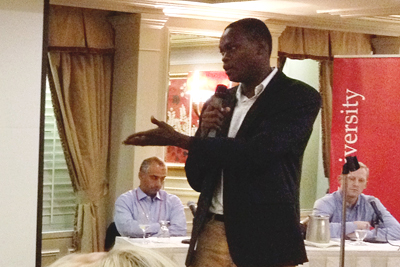 Social media as a marketing tool and a platform for engagement is clearly changing how Cornellians do business, according to an alumni speaking at a panel discussion at the Cornell Club in Manhattan Aug. 14.

More than 150 guests were on hand for the event, "Social Media Success Stories from Cornell Alumni," the first panel in the Technology and Media Influencer Series, sponsored by Cornell Wall Street and the Cornell Club of New York.

"The beauty of social media as a marketing tool really is its duality," said panelist Stephanie Abrams '06, co-founder and CEO of Collective Media Group LLC. She noted that she used social media to launch her digital marketing business. "While providing the opportunity to reach a large audience, you also have the ability to specifically speak to customers as well," she said.

Joe Essenfeld '01, founder and CEO of Jibe, a software company that helps companies recruit top-quality candidates, said that Jibe interlaces social media with the job application process, enabling applicants to leverage their Facebook and LinkedIn connections in the recruitment process. "It was the first time that we felt that job seekers could actually activate their social network while they apply to a job," he said.

Social media was also used to launch, build and license TrukFit, the fashion line of rap star Lil Wayne, said its CFO Susan Guerin '83. TrukFit, she said, employs social media as an information portal. "We want to be the place for news as well as the place for our brand. We're hoping that by seeing TrukFit every time [consumers are] reading news they're interested in, they'll create the awareness," said Guerin.

Habib Kairouz '88, managing partner of Rho Capital Partners and Rho Ventures, has been investing in the Internet since the mid-'90s. For Kairouz, the dramatic shift was one of privacy, he said. "We have evidence of hundreds of millions of people who are actually signing up on these social networks and who are very comfortable giving a lot of information about themselves and giving it out to the public," he said.

Invidi Technologies, where Michael Kubin '71 serves as executive vice president, said that the company brings the social media idea of addressability -- delivering a specific ad to a specific user -- to television. "It doesn't matter what the advertiser is, our technology selects the appropriate household -- and actually the appropriate viewer -- for each particular product," said Kubin. "That changes the game for television entirely."

"Everything we do is about groups," Lampert said. Recently, this marketing manifested itself as an "awkward group photo" contest on Facebook. "Because we have an education software company, we've taken the approach of creating an exciting and engaging brand around it. We feel like we have to speak to this generation," he said.

Claire Lambrecht '06 is a freelance writer based in New York City.