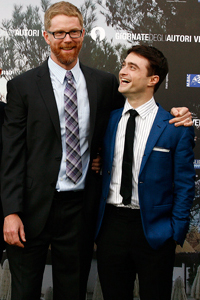 The jury statement: "The film is a work of highly creative filmmaking. Thanks to a rigorous choice of style and an original approach, it is sure to leave its mark on the new season in American film, one which reconciles the expectations of audiences, cinephiles, and the cultural legacy of the last century. With its spectacular performances, powerful score, and startling, sophisticated cinematography, the film became a genuine event at Venice 70."

Cornell in Hollywood will host an exclusive preview screening of “Kill Your Darlings,” with assistant professor Austin Bunn and director John Krokidas introducing and discussing the film, Oct. 4 at Sony Studios in Culver City, Calif.

The screening is free (but tickets are limited) for Cornell Club of L.A. members and guests.

Bunn and Krokidas co-wrote the screenplay, about a circle of friends including several Beat Generation writers, and a murder committed in 1944 by one of them, Lucien Carr. The cast features Daniel Radcliffe as Allen Ginsberg, Jack Huston as Jack Kerouac, Ben Foster as William S. Burroughs and Dane DeHaan as Carr; plus David Cross, Michael C. Hall, Jennifer Jason Leigh, Elizabeth Olsen and Kyra Sedgwick.

Bunn teaches dramatic writing and screenwriting in the Department of Performing and Media Arts. “Kill Your Darlings” was a Grand Jury Prize nominee at the 2013 Sundance Film Festival, and will be shown at the 2013 Toronto International Film Festival in September before its limited theatrical release in October.