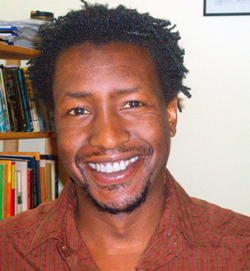 New African Magazine has named Mukoma wa Ngugi, assistant professor of English, one of the 100 most influential Africans, writing:

"This popular author and Kenyan intellectual is a professor at Cornell University in America. More than just an author, he has become an acclaimed educator, a social commentator, satirist and scholar. He is the son of the renowned writer Nguigi wa Thiong'o. This year Mukoma wa Nguigi published his third novel, 'Black Star Nairobi,' an ation-packed detective thriller. Nguigi has been nominated and shortlisted for various prestigious awards including the Caine Prize for African writing and the Penguin Prize for African writing.

The magazine quotes him as saying, "In a way I do mirror - or maybe Ishmael mirrors - you know, my struggles for identity. Eventually I had to tell myself, 'Who decides a person can have only one identity?' And I just decided to acknowledge, to live out, my multiple identities."