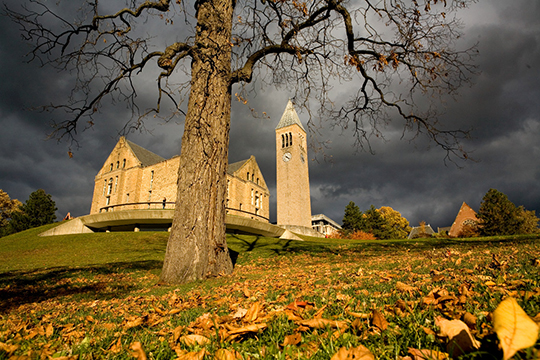 Cornell ranks No. 29 on Online Schools Center's list of 50 Most Haunted Colleges and Campuses:

"Ithaca’s Cornell University is home to seemingly sophisticated spirits, as male apparitions in tuxedos are said to have appeared in the school’s collegiate Gothic Willard Straight Hall, seemingly on their way to a formal event. Another legend concerns a terrible 1967 fire that ripped through Cornell’s North Campus Ecology House. The blaze took the lives of half a dozen undergraduates, three graduate scholars and a faculty member. Since then, students have allegedly heard mysterious footsteps and voices, while others claim to have seen specters in their bedrooms. Central Campus’ Olin Library, meanwhile, is thought to host the malevolent ghost of a woman who was either crushed by a toppling bookshelf or else mangled in mechanized shelves on the library’s lower floor."