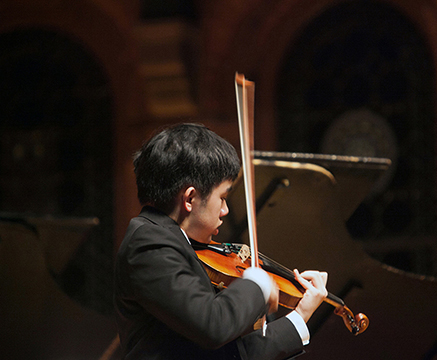 Huang performed the first movement of Edouard Lalo’s “Symphonie Espagnole” with accompanist Joe Pepper. As the winner, Huang will perform the piece with the Cornell Symphony Orchestra, Feb. 28 in Bailey Hall.

A chemistry major and music minor in the College of Arts and Sciences, Huang studies violin with visiting lecturer Amy Christian and is a member of the Cornell Symphony Orchestra.

He was one of four finalists chosen by judges Malcolm Bilson and Matthew Ardizzone following a semifinal round earlier in the day. “All the participants played at a very high level and it was a difficult decision,” Bilson said of choosing the winner.

The other finalists were:
• Jae Baek ’17, a biological engineering major in the College of Engineering, performing François Borne’s “Fantaisie Brillante on Themes From Bizet’s ‘Carmen’” for flute, accompanied by Mary Ann Miller;

• HaeSoo Cheon ’15, a psychology and Asian studies major in the College of Arts and Sciences, performing the Karl Goldmark Violin Concerto, first movement, accompanied by graduate student Loren Loiacono; and

• Jiacong Xu ’17, a computer science major in the College of Arts and Sciences, performing Franz Liszt’s Piano Concerto No. 1, accompanied by Greg Rosenthal ’17.