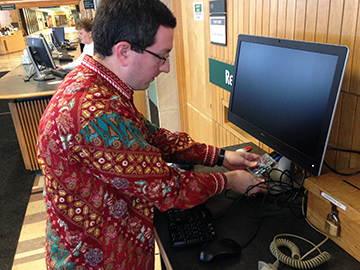 The library just got a little more awesome, thanks to a new machine in Olin Library.

Anyone who wishes to recommend books, CDs, DVDs or anything else in the library can use the Awesomizer – yes, really – to scan the barcode of a library item and add it to a list at awesome.library.cornell.edu.

The Awesomizer is powered by a Raspberry Pi, “essentially a credit-card-sized computer” said Jenn Colt, a user experience designer at the library. Raspberry Pi connects to the Internet and the library’s catalog, looks up the items’ barcodes and displays them on the website. It also pulls in cover images from Google Books.

Library Outside the Library, the committee that developed the Awesomizer, collaborated with the Ithaca Generator.

So far, the Awesomizer has captured dozens of recommendations, from an anthology of John Milton poems and a work of science fiction to social theory tomes on nuclear weapons and a biography of John Wayne.

The library’s technological playground doesn’t end with the Awesomizer, though. One project in development is iBeacons, Bluetooth tags that help physically locate items, such as books on shelves.

“It’s great to put the library’s experimental side out there,” Colt said. “People might not expect us to innovate in quite this way, so it’s great to use this new technology and demonstrate the kinds of things we can do.”