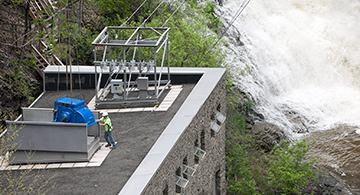 Crews used a heavy crane May 12 to lift the second reconditioned Ossberger crossflow turbine into Cornell’s Hydroelectric Plant in Fall Creek gorge. The plant generates 2 percent of the university’s electricity.

The plant – about a third of a mile from the intake on Beebe Lake – is visible from the suspension bridge near the Johnson Museum. Water travels from Beebe Lake through a 5-foot-diameter penstock (a large intake pipe for water) along the gorge – featuring a 140-foot vertical drop – to supply the two crossflow turbines that generate power.

Creating green power is nothing new to Cornell; the university’s first electrical generation facility in Fall Creek gorge was built in the early 1880s. In 1904, the present plant was built and most of the existing intake pipe dates back to then, with a 500-foot length getting an upgrade from wood to pre-cast concrete in 1953. By 1981, the plant was completely renovated and all the original machinery removed. Two Ossberger cross flow turbines were installed – and now those turbines and generators have been refurbished with state-of-the-art parts. 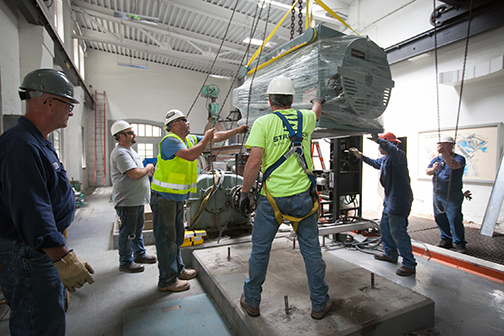 Frank D. Perry, of Infrastructure, Properties and Planning, manages the plant. He said both Ossberger turbines were shipped to the manufacturer in Germany. The first turbine was refurbished and then put back into place last fall. With both turbines back in place and with recently upgraded controls, the university will generate up to $300,000 worth of “carbon-free” electricity annually, expected to be the highest amount ever – for the next three to four decades.