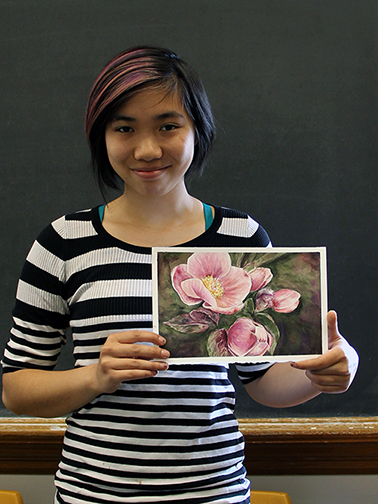 In the brutal, mind-bending world of agronomic combat that is a regional weed Olympiad, Patricia Chan ’17 became a legend.

Contestants solve real-life farmers’ problems, compete in weed and herbicide identification, and test their skills calibrating sprayers. Winners often get scooped up as prized employees of seed and agricultural companies.

Among the 55 undergraduate and graduate students participating in mid-July at the Northeastern Collegiate Weed Science Society Contest at Blacksburg, Virginia, Chan was the only student to correctly identify the bonus-question weed: Lobelia inflata, or Indian tobacco.

“What helped was that I was familiar with the genus beforehand and could recognize it from the flower structure,” said Chan. “I did take botanical illustration this spring [taught by Marcia Eames-Sheavly], which probably does help with learning to examine the details of a plant. And I had taken the plant systematics and taxonomy course [taught by Jerrold Davis, professor of plant biology].”

Chan said Davis' taxonomy course involved a lot of hands-on practice with plant identification at the family level, as she worked in the Liberty Hyde Bailey Conservatory, crop gardens, the university’s weed garden and in the horticulture club’s greenhouse to become familiar with a lot of plants.