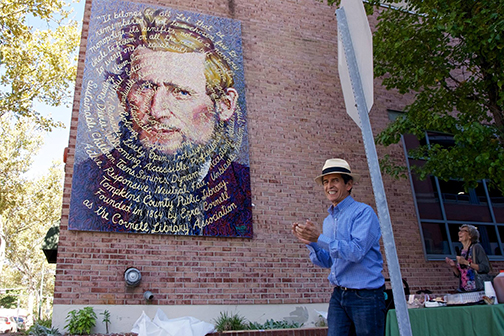 The mural, installed on the exterior wall of the Tompkins County Public Library along Cayuga Street in downtown Ithaca, honors Ezra Cornell's founding of what was originally the Cornell Free Library in 1864 - one year before the founding of Cornell University.

Next month will mark the 150th anniversary of the completion of the library. The mural, depicting Ezra Cornell’s face and concentric circular script, includes a quote by Francis Miles Finch, an Ithaca native and Yale-educated lawyer, who assisted Ezra Cornell in drawing up the charter for a library association: “It belongs to all. Let that be remembered. Not to a chosen few to monopolize its benefits, not to a narrow circle to frown on all the rest, but to all, to every one as equal with every other.”