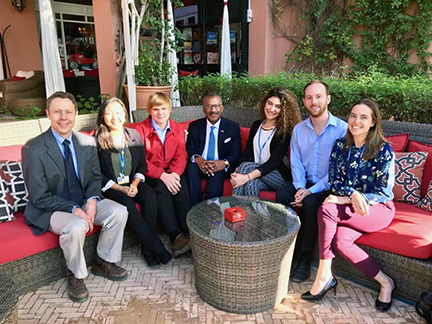 Dwight Bush ’79, the U.S. ambassador to Morocco, spoke to Cornell students attending the 22nd Conference of the Parties – known as COP22 – an international meeting (Nov. 7-18) in Marrakech addressing the problems of climate change.

Bush, appointed as ambassador by President Barack Obama in 2014, discussed Morocco as a regional leader in sustainability, with ambitious renewable energy goals and possessing some of the world’s largest solar energy installations.

The students learned that diplomatic relations between Morocco and the U.S. have been one of the longest in American history. Bush also discussed the importance of private industry in working with governments to tackle climate change.

The ambassador and the students also reflected on the Nov. 16 address to COP22 by U.S. Secretary of State John Kerry – who denounced climate change deniers and criticized those who wish to destroy the historic 2015 Paris Agreement – that seeks to mitigate global warming.