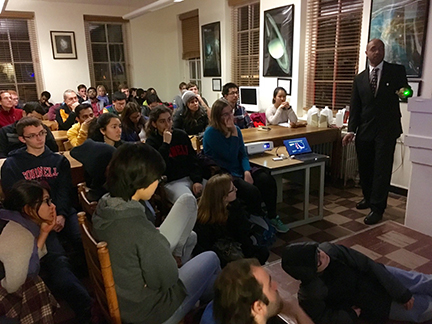 Astronomers are finding exoplanets – planets outside of our own solar system – faster than ever before. Ramirez explained to the evening crowd about how various planets (light years from Earth) found in cosmic “Goldilocks” or ”habitable zones” may support alien life. The rapt audience – mostly Cornell students – spent an hour absorbing new information and then gazing at the night sky through telescopes.

Ever since the Fuertes Observatory – the university’s fifth – was completed in fall 1917, astronomers and their students have been meeting on select Friday nights for heavenly talks. The lectures are hosted by the student-run Cornell Astronomical Society.

Coming up Nov. 11, astronomy professor Phil Nicholson speaks on “What Cassini Has Taught Us About Saturn’s Rings.”  The NASA Cassini spacecraft arrived at the Saturn system in 2004, returning voluminous information on the planet, its remarkable moons and complex rings. Despite high technology, Saturn's rings still perplex astronomers.

On Dec. 2, Siddharth Hegde, Carl Sagan Institute research associate, examines “The Search for Life in Extreme Exoplanetary Environments” will explore ways to consider Earth-like planets for potential habitability and life by providing a link between geomicrobiology and observational astronomy.

Both upcoming lectures start at 7:30 p.m. in the observatory’s classroom.