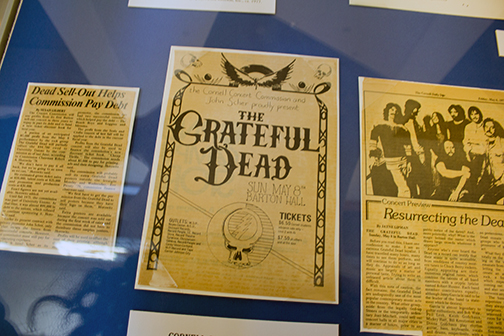 These beverages – and many more – were requested by the Grateful Dead for the band’s May 8, 1977 show at Barton Hall, according to the tour rider in its contract with the Cornell Concert Commission. Pages from the contract, which also calls for a messenger with “enough sense to be able to come back from a supply house with something useful, the same day, and not lose the receipt,” are among the items associated with the historic show now on display in the library’s Division of Rare and Manuscript Collections.

“It gives a pretty interesting behind-the-scenes look at the show,” said collections assistant Kristen Reichenbach ’16, who curated the small exhibit in the reference room on Level 2B, Kroch Library, to celebrate the concert’s 40th anniversary this year.

The show – known to Deadheads simply as “Cornell ’77” – was part of the band’s “Terrapin Station” tour and became a legendary part of Grateful Dead lore, widely considered one of their best concerts ever. At Cornell, it was also an iconic event, in part for the freak May snowstorm that struck campus while fans were inside Barton.

Since 2011, a recording of the show has been preserved in the Library of Congress’ National Recording Registry. “Cornell ’77,” a book about the show, will be released in April by Cornell University Press.

In addition to pages from the rider, the exhibition on display through May also includes photographs and newspaper reviews of the concert.