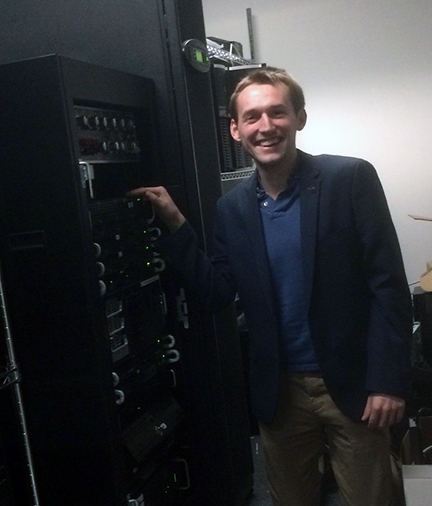 Steve Strogatz/Provided
Alex Townsend with his computer in Malott Hall.

When 18-year-old Aaron Yeiser was awarded second place honors – and $175,000 – in the national Regeneron Science Talent Search, no one was prouder than his mentor Alex Townsend, assistant professor of mathematics.

Townsend began mentoring the high school senior while he was an applied math instructor at MIT, through a program called MIT PRIMES. For the last 15 months, Townsend has continued to mentor Yeiser privately via weekly Skype and email exchanges.

“Aaron is an ambitious and mathematically talented young man with astonishingly advanced technical skills and heaps of perseverance,” said Townsend. “Working with Aaron is wonderful on every level. If I mention a mathematical topic, then by next week he will have taught it to himself. If I ask him a technical research question, he will come back to me with an expertly considered reply. His attitude to research and his own learning is his fantastic strength. Those of us who know Aaron realize that this is only the very beginning for him.”

Yeiser’s winning project involved developing a new mathematical method for use in the field of computational fluid dynamics. He ran his simulations on a mini-supercomputer Townsend built, which now resides in the basement of Malott Hall.

Yeiser's work was motivated in part by an NSF grant Townsend received to build a next-generation spectral method, which will help to solve real-world fluid flow and airfoil problems. Townsend’s goal is to demonstrate that spectral methods in computational mathematics can be a flexible, general and powerful numerical tool.