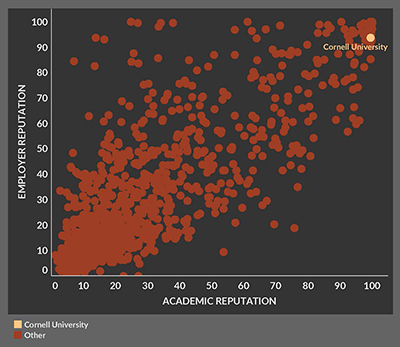 QS/Provided
This chart shows Cornell's performance in the academic and employer reputation indicators in the global context. The closer an institution is to the top-right corner of the chart, the more reputed it is among academics and employers.

Cornell is No. 14 among the world’s universities in the 2018 QS World University Rankings, released June 7.

QS analyzed over 75 million citations from more than 12 million papers, 115,000 survey responses from employers and academics, and considered more than 4,000 universities before evaluating 980 of them.

The annual rankings are based on six indicators:

The latter two indicators are proxy measures for how attractive the institution is to international faculty and international students.

QS weighted the academic reputation indicator most heavily. That indicator was Cornell’s strongest of the six measures, earning a score of 99.6 out of a possible 100. Cornell gained the most ground compared with last year in its international students indicator, scoring 79.2.

Other Cornell subject areas in the top 20 included: hospitality and leisure management, No. 11; biological sciences, No. 14; statistics and operational research, No. 16; English language and literature, No. 19; environmental sciences, No. 19; and politics and international studies, No. 19. Cornell’s subject area rankings can be found here.