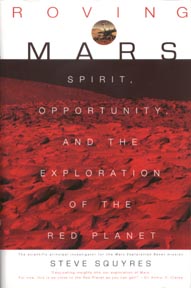 It has been an amazing mission from the beginning. Getting two tremendously intricate machines funded, designed, built, tested, approved, launched, landed safely on a planet millions of miles from Earth and functioning nearly continuously for more than a year and a half is an extraordinary feat.

And the details only make it better. "Roving Mars: Spirit, Opportunity and the Exploration of the Red Planet" (Hyperion, 2005) by Steve Squyres, the mission's principal investigator and Cornell University's Goldwin Smith Professor of Astronomy, is an inside look at how the Mars Exploration Rover (MER) mission came together. And how, time after time, it almost didn't.

Squyres started preparing for the mission (because such things don't get whipped up in an easy couple of years) in 1977. In turn, the process was agonizingly slow and whirlwind fast -- littered with more challenges, crushing disappointments and maddening frustrations than only the most dedicated could bear.

On Mars, the rovers Spirit and Opportunity have had their share of individual dramas as well. But if there ever were doubt that they would accomplish their scientific mission -- searching for evidence that Mars once had conditions suitable to sustain life -- it was long ago dispelled.

Spirit and Opportunity, which would have been successes had they operated for 90 Martian days, are still going strong after more than 1,000 Martian days between them. Squyres tells how at Meridiani Planum, Opportunity discovered hematite, jarosite, sulfur, bromine and other evidence that water once flowed there. On the other side of the planet in the Columbia Hills, Spirit has detected those minerals and others (goethite, for example, which actually contains water in its crystalline structure) -- indicating those rocks may also once have been exposed to water.

There are still many more questions than answers. But thanks to the rovers -- and their creators -- we know volumes more about Mars than we did just two years ago.

The book isn't just about Spirit and Opportunity. It's also a story of the people who built them. "Roving Mars" closes with 27 pages of names of people involved in the mission. Over 4,000 in all.

No one would deny Squyres getting much of the glory, but his theme throughout the book is that without that giant family of 4,000 engineers, scientists, technicians and support staff, the whole thing might never have happened.

"Roving Mars" also includes 32 pages of photos. Some, like panoramic views of Endurance Crater, are probably familiar. Others, such as a close-up of what the team called "freaky little hematite balls" until they started calling them "blueberries" -- were less widely circulated.

Several photos show the MER team members -- beaming -- as they get a glimpse of the first rover images from Mars.

And in one, taken just after Squyres and mission assurance manager Mark Boyles learn Spirit was successfully deployed, both men have their eyes closed and arms in the air. Boyles is cheering. Squyres is smiling so widely, your face aches in sympathy.

The photos show the emotion. The book tells -- beautifully -- why it's there.