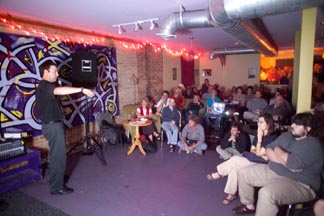 A single strand of red Christmas lights sparkles along the raw brick walls of the Lost Dog Café's upstairs lounge -- a space of silvery heating ducts, mirrors, beaded lamps and worn, velvety couches -- as Jim Bell begins setting up his projector, chatting with organizers, and wondering what to expect from the next two hours.

The Cornell associate professor of astronomy and leader of the panoramic camera (Pancam) team for NASA's Mars Exploration Rover mission is the presenter at the Sept. 20 debut of Ithaca's Science Cabaret, a monthly event sponsored by the Boyce Thompson Institute for Plant Research (BTI).

Enthusiastic and easygoing, Bell is no stranger to academic talks. As for evening presentations in dark, funky lounges, though -- "I have no idea what to expect," he says. "But you know what? I'm going to have fun."

As he says it, the first audience members arrive. Within 10 minutes, the lounge is packed.

Cornell horticulture professor Dave Wolfe gives Bell a quick introduction. And Bell takes it from there.

The Science Cabaret concept, inspired by Europe's popular Café Scientifique movement of the 1990s, is about taking science away from stiff lecture halls and bringing it into a laid-back social atmosphere.

"It's important to get away from the ivory tower image," says co-organizer and BTI public affairs officer Shawna Williams. "So many science talks are fairly technical. People would have to come all the way up here [to campus] in the middle of the day [to] sit in an auditorium. We wanted people to feel comfortable." Williams has been working with Sarah Davidson, a Cornell graduate student who proposed the idea last March, to bring the concept to Ithaca.

Bell's presentation, "Postcards from Mars," introduces the audience to "two amazing robot geologists -- Spirit and Opportunity." Using the images the rovers have sent back to Earth -- Spirit's first glimpse of its landing spot at Gusev Crater, Opportunity's view, taken just days ago, of the stretch of Meridiani Planum dubbed Erebus Highway, and dozens more -- Bell tells the mission's story. 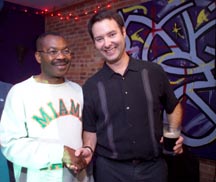 He pauses for questions, anecdotes and the occasional sip from his pint of Guinness. And yes, he has fun.

So do the audience members -- Cornell graduate fellow Enyi Elekwachi, for example, who is full of questions for Bell. "When I saw [the notice about Science Cabaret] I said, 'I have to see this,'" he says.

Freeville residents Ron Szymanski and first-grader (and aspiring astronaut) Veronica Cator-Szymanski heard about the event on the radio -- and came to see the planet Veronica wants to be the first to visit. "We're very excited to get this experience, to have this opportunity," says Ron Szymanski.

Sure, the concept is about teaching science. But more, says Hoffmann, it's "to put science in juxtaposition with music and the written and spoken word, and for people to form the implicit connections."

The format, especially the give-and-take between audience members and speakers, encourages those connections.

"It was nice that people felt comfortable jumping in the middle of things to ask questions," Bell says. "They said it was nice to hear some of the inside-track stuff. It helps make it less academic."

With the first Science Cabaret now behind them, organizers Williams and Davidson are looking forward to the next event, on Oct. 11 -- a demonstration of the theremin, the world's first electronic musical instrument, by musician James Spitznagel.

Other cabarets planned are "God in the Forest: The Ivory-Billed Woodpecker as a Spiritual Paradigm" with John Fitzpatrick, director of the Cornell Lab of Ornithology, and conservationist Dave Foreman on Nov. 1; and "Crocheting the Hyperbolic Plane" with Cornell mathematician Dania Taimina on Dec. 6. All events are at 7 p.m. on the second floor of the Lost Dog Café, 106 S. Cayuga St., Ithaca.