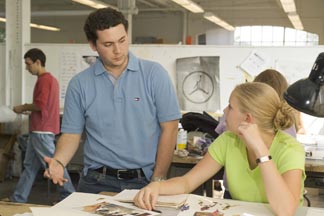 The 204 students from Tulane, Xavier and the University of New Orleans, offered an academic haven by Cornell, have begun to blend into the campus -- trekking up the hill from Collegetown, mingling in Robert Purcell Community Center and Appel Commons and catching up in their classes with late-night study sessions.

Meanwhile, Cornell President Hunter Rawlings issued a statement describing a new university policy related to the Hurricane Katrina relief effort. The policy includes paid administrative leave for relief workers and opportunities for Red Cross emergency responder training. Cornell, he said, will allow faculty and staff already trained in emergency response to take up to three consecutive weeks to travel to the affected areas with official relief organizations. The new policy, in effect until September 2006, will grant paid administrative leave for relief activities approved in advance by the dean or vice president of the employee's department.

Rawlings' statement includes other opportunities to contribute, including a Red Cross emergency responder training course to begin in October on campus, upcoming blood drives and a reminder that relief organizations are still in need of donations. For a complete list, see the statement at http://www.news.cornell.edu/stories/Sept05/Rawlings.Katrina.stmt.html.

Organizations across campus continue to offer support to the displaced students. As just one example, a computer loaner program, operated by the University Registrar's office with support from Cornell Information Technologies, the Technology Connection, and individual departments and schools, is collecting and distributing computers to students whose computers were left behind in New Orleans.

In the College of Architecture, Art and Planning, which absorbed 36 Tulane students, administrators and faculty scrambled last week to accommodate every student.

"We expected that we would be able to take on maybe 10 to 12," said Arthur Ovaska, the college's director of undergraduate programs. When triple that number arrived, everyone pitched in to make sure no one was turned away. 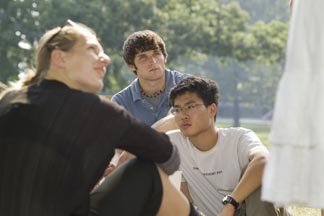 "It happens that [Tulane's architecture] program is very similar to ours in structure and curriculum," said Ovaska. The similarity was a factor in attracting the students -- but since the program is based on small studio classes, it also made it harder to absorb the unexpected additions. And getting all the students the necessary equipment was another hurdle, since most left things like laptops, drawing boards and model building materials in New Orleans.

Some of those quandaries were solved by coincidence. The space shortage, for example, was alleviated by taking advantage of a new studio that happened to be in the final stages of renovation. And last year, it turned out, the Cornell chapter of the American Institute of Architecture Students collected a wide assortment of left-behind or donated architecture equipment. "Three days after the Tulane students arrived, they had a sale," said Ovaska. "They were able to get used equipment at very cheap prices."

The work and generosity of faculty and staff made it all come together. "Everyone seems to be settled in," Ovaska said.

Student from Netherlands settles in

On the other side of campus, Victor Brummer, a Tulane freshman from Enschede, Netherlands, is taking his turbulent introduction to the United States in stride.

Brummer, who plans to study business, had barely arrived at Tulane when he heard the evacuation order. Brand-new to the United States, he accepted an offer from a student in his dorm and found himself traveling with the student's family to Potomac, Md.

From there, he e-mailed the only other person he knew in this country: an elderly woman named Varda Holland-Witter who befriended him on his nine-hour flight from Amsterdam to Detroit. He reassured her that he was safe and mentioned that he was considering transferring to another university, including the University of Colorado-Boulder, the University of Miami and Cornell, the school he found most receptive to students with financial aid.

She e-mailed back to point out that Ithaca is very close to Syracuse. And she happens to live in Syracuse.

A few days later, the woman met Brummer's flight at the Syracuse airport and took him home for the night. The next day, she drove him to Ithaca.

All a little confusing, and to the less easygoing, maybe a little overwhelming. But Brummer -- besides being a little dubious about the prospect of cold weather and tough academics (neither of which he was quite planning for in his first semester at Tulane) -- is unfazed.

"Maybe I'll be forced to work here," he said, with a smile and a true New Orleans laissez-faire shrug. "Now I'm here, I'm happy. I accepted it really fast, somehow. So it's fine."