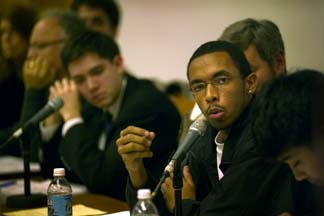 Blacks are more violent than whites, claims the September issue of The Cornell American, citing data from a report published by the New Century Foundation, an organization branded by the Anti-Defamation League as advocating "pseudoscientific white supremacy." That article set off a fierce campus debate that led to a panel discussion Oct. 24 at Cornell on the question of "when, if ever, are limits on the press appropriate?"

About 150 people gathered in Lewis Auditorium in Goldwin Smith Hall for the discussion "Censor This!" organized in response to the article written by Cornell undergraduate Chris Menzel. The Cornell American is an independent nonprofit student-run conservative journal that is distributed free on campus.

The article, "The Color of Cornell's Crime -- Unmasking the Face of Ithacompton," also warned Cornell students to "watch out for gangs of black thugs" and to "carry your Smith & Wesson" because of three muggings that, the American said, took place in Collegetown and on West Campus in late August.

Eric Shive '07, editor-in-chief of The Cornell American and one of eight panelists, defended the article. "When speech is limited, some subjects will never get discussed," said Shive. "Censorship on this campus is a one-way street. Leftists in the administration and the student government routinely and systematically attempt to silence the voice of conservatives. … Three attempts have been made in the last year and half to defund the American … the intent is to limit free speech " 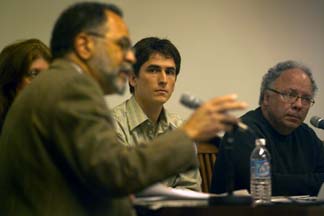 Panel member Robert L. Harris Jr., vice provost for diversity and faculty development and professor of African-American history at Cornell, had denounced Menzel's article as "blatant in its distortions and gross generalizations." Although black youths are arrested more often than white youths, argued Harris, it does not follow that blacks are more violent. A black youth is six times more likely to be convicted than a white youth with a similar criminal record charged with a similar crime, he said. Further, speech in the United States is not entirely unrestrained.

"You can't libel, slander or deliberately falsify information," he said, noting that First Amendment principles do not apply at Cornell, which was chartered as a private institution.

"It doesn't mean that the minute you step on campus you no longer have free speech -- individually and collectively you do -- but the institution itself is not held to the same standards as would a public university," explained panel member Dianne Lynch, dean of the School of Communications at Ithaca College.

According to Cornell policy, "although hate speech may be extremely offensive … posting hate speech does not generally constitute a violation of university policies or codes. This is because, especially as an educational institution, Cornell is committed to the protection of freedom of expression. In exceptional cases, however, the university may decide that hate speech directed to classes of individuals presents such a hostile environment that certain restrictive actions are warranted."

In an October editorial in the American, Shive wrote that after the article was published "Vice President for Communications Tommy Bruce summoned the American to a hastily scheduled 'imperative' meeting with administrators. After consulting outside counsel, we rejected his demands. The administration has no right to prior-restraint of conservative journalism." Shive also said, "If you are looking for an apology, don't hold your breath."

The Cornell American, founded in 1992, received about $5,000 last year through Cornell's Student Assembly Finance Commission (SAFC), money that came from the student activity fee that each student pays to the university. Harris questioned whether students should be required to pay for the paper. 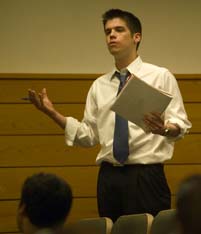 According to Shive, the SAFC has several resolutions pending against the American and had previously frozen the journal's funds and then cut them by 10 percent last year for "unethical practices." The American also derives funding from private donations and advertising. In the American's October issue, a staffer reported that the journal had received a "flood of alumni donations" in the previous month.

"In terms of strict legality, I don't see anything [in the Menzel article] even close to crossing the legal limits on free speech," said Lynch. "The question we ought to be asking is 'what kind of civil discourse do you want to have in a learning community.'"

Said Shrive, "The Cornell American presents a perspective that you aren't going to find in any classroom or other newspaper on campus." He pointed out that the panel discussion was only taking place because the journal pushed the limits.

Censor This! was organized by Andy Guess'05 and Samantha Henig'06 of StudPubs, a newly formed umbrella organization for all student publications at Cornell.

Thomas Oberst is a writer intern at the Cornell News Service.