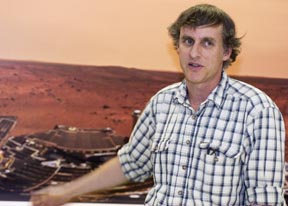 Kevin Stearns/University Photography
Steve Squyres talks about one of two panoramic images of Mars, which were displayed for the first time to the public at a celebration marking the end of Spirit's first Martian year on the red planet.

The intrepid Mars rover Spirit was excused from attending the Nov. 18 party in her honor. She was busy climbing down from the summit of Columbia Hills and heading toward a new target called Home Plate, while wrapping up her first trip around the sun since landing on Mars in January 2004.

But she was present in -- well, spirit.

The Cornell contingent of NASA's Mars Exploration Rover mission saluted the rover with a gathering at the Space Sciences Building -- two days before the official moment (7:37 p.m. Sunday, Nov. 20) occurred.

"To me this is one of the most significant milestones in this project," said Steve Squyres, the mission's principal investigator and Cornell's Goldwin Smith Professor of Astronomy. "We have gotten to experience Mars in all the seasons of the year. We've seen all of its moods."

Squyres, colleague and Pancam lead scientist Jim Bell and others celebrated with cake and a look back over a year that exceeded everyone's expectations. On opposite walls, two brand-new Pancam images got their first public viewing: one from Spirit's perch near the summit of Columbia Hills, the other taken by her twin, Opportunity, in a treacherous-looking outcrop area called Olympia.

Both rovers have surpassed their projected lifetime by more than seven times. Plenty of challenges have confronted their creators along the way, but Rob Sullivan, Cornell senior research associate and team member said that other than a few minor signs of age (Spirit's rock abrasion tool, for example, is not quite as abrasive as it once was), Spirit and Opportunity are still in excellent health.

"It's been a remarkable experience," said Squyres, who expressed his gratitude with Bell to the team of scientists, engineers, support staff and family members whose work and sacrifice made it all possible.

"I've been extremely privileged to work with this team," said Squyres. "I cherish having had the opportunity to work with such an extraordinary group of people. To all who have been involved -- thank you."