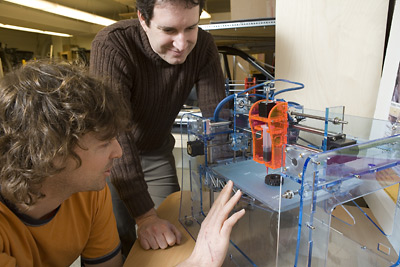 Lindsay France/University Photography
Hod Lipson, assistant professor of mechanical and aerospace engineering, right, and engineering graduate student Evan Malone work with a Fab@Home machine in the Computational Synthesis Lab in Upson Hall Feb. 22. On the stage is a Lego tire duplicated by the Fab@Home.

The Altair 8800, introduced in the early 1970s, was the first computer you could build at home from a kit. It was crude, didn't do much, but many historians would say that it launched the desktop computer revolution.

Hod Lipson, Cornell assistant professor of mechanical and aerospace engineering, thinks a little machine he calls a Fab@Home may have the same impact.

Some day, Lipson believes, every home will have a "fabber," a machine that replicates objects from plans supplied by a computer. Such devices could change how we acquire common products, he suggests: Instead of buying an iPod, you would download the plans over the Internet and the fabber would make one for you.

Such machines could evolve from the 3-D printers currently used by industrial engineers for "rapid prototyping." They design parts in computer-aided design programs and feed the designs to 3-D printers to make working plastic models. A 3-D printer has a small nozzle that scans back and forth across a surface, depositing tiny droplets of quick-hardening plastic. After each scan, the nozzle moves up a notch and scans again until it has built up the complete object, layer by layer. With multiple nozzles or a means of swapping supply cartridges, the machine can create objects made of many different materials. An electronic circuit, for example, can be made by combining an organic semiconductor, metallic inks and ceramic insulators. 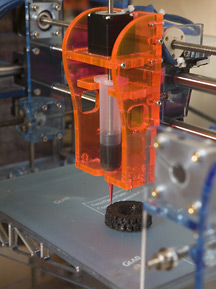 Provided
The Lego tire on the vehicle.

Price tags for these machines average around $100,000, but you can build your own Fab@Home for about $2,300 worth of off-the-shelf parts. The prototype, designed by Evan Malone, a Ph.D. candidate in Lipson's Computational Synthesis Laboratory, is slower than the commercial models, and its resolution, or ability or produce fine detail, is lower, but people are finding practical -- and often unexpected -- uses for it.

Commercial machines can't be modified, which, Lipson says, impedes the progress of the technology, but the Fab@Home is "open source." Anyone can download the plans at http://www.fabathome.org, which is getting about 20,000 hits a day. The site also includes construction hints, ideas for applications, notes on the history of 3-D printing and discussion groups. People are invited and encouraged to make improvements, and a sort of cult is slowly forming.

So far, Lipson says, about a dozen people have said they are building one, and he knows of three that are actually up and running -- two at the University of Washington and one in Innsbruck, Austria. Lipson's group has built several and lent a couple to other researchers. 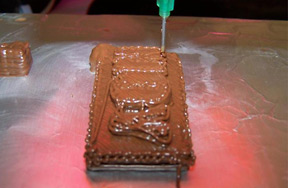 Future fabbing machines will have to shift from one raw material to another in midstream and probably deposit material in three dimensions, not just layers, says Lipson. Research in his lab is taking early steps. Malone has built a machine that uses a rack of interchangeable cartridges to make devices out of several materials at once. So far, it has made a working battery, complete with outer case. Malone's long-range goal is to "print" a complete robot, including limbs, actuators, control circuitry and batteries.