Using high-performance computing techniques and more than 600,000 bird checklists from citizen-science participants, the Cornell Lab of Ornithology and partners have produced the nation's first assessment of birds on public lands. Presented in the 2011 State of the Birds report, the analysis found that more than 300 bird species have 50 percent or more of their U.S. distribution on public lands, highlighting the tremendous potential for conservation.

Publicly owned lands and waters account for more than one-third of U.S. lands and all of the country's oceans. The report will help public agencies identify species with high potential for conservation on the lands that they manage. The United States has about 1,000 bird species, 251 of which are threatened, endangered or of conservation concern. 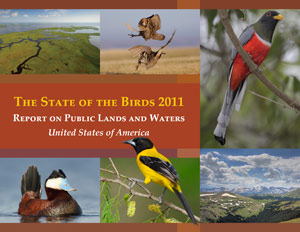 Provided
2011 State of the Birds report

The report emphasizes urgent needs for increased protection and management by public agencies to prevent extinction of many island species, buffer forest and arid land species from urban development and agriculture. It also cites the need to protect severely declining ocean birds and balance the nation's need for resources through logging, mining and energy extraction with conservation.

"Birds are excellent indicators of the health of the environment, including the human environment," said Kenneth V. Rosenberg, director of conservation science at the Cornell Lab. "The report highlights the tremendous responsibility public agencies have for conserving birds and their habitats."

Fifteen public and private organizations collaborated on the report, with Cornell Lab staff playing major roles in the scientific analysis and publication. The team generated novel bird distribution maps by combining the Protected Areas Database of the United States with bird observations from eBird.org, a citizen-science project of the Cornell Lab and National Audubon Society. The Cornell Institute for Computational Sustainability, Oak Ridge National Laboratory, and DataONE helped lead the analyses, which required 70,000 hours of supercomputer time on the National Science Foundation's TeraGrid.

The State of the Birds report was made possible in part by funding from the National Science Foundation and Leon Levy Foundation.