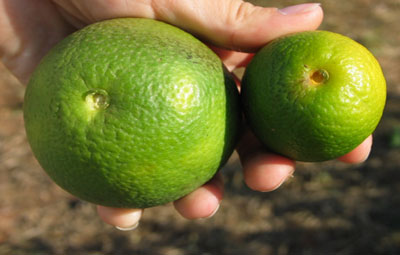 Ricke Kress
Huonglongbing impedes the distribution of nutrients within the tree, resulting in fruit that are abnormally small and frequently unmarketable due to off-flavors.

The trees were engineered to provide a natural resistance to the Asian citrus psyllid, the insect responsible for spreading the deadly bacterial disease huanglongbing -- also known as citrus greening because it causes perpetually immature green fruit that tastes bitter, medicinal and sour. First confirmed in Florida in 2005, the disease has spread to all citrus growing counties, and growers face a costly regime of cutting out dying trees and spraying insecticides to reduce the psyllid populations. 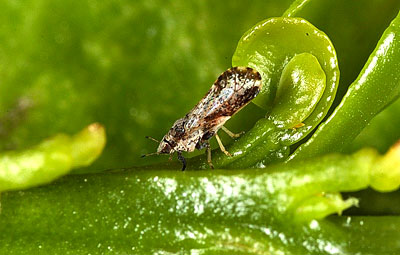 Provided by the USDA
The Asian citrus psyllid spreads the bacteria that cause huonglongbing, also known as citrus greening.

Far from the citrus growing climate and the federally quarantined psyllid pest, Cornell scientists turned to a model system instead: tomatoes.

Research support specialist Ewa Borejsza-Wysocka and technicians Peggy Abbott and Shirley Kuehne then used genetic engineering to insert candidate genes individually and in groups into tomato plants. They found some transgenic lines were very effective in making the tomato leaves unappealing to tomato psyllid insects and inserted the most promising genes into the Hamlin orange variety. 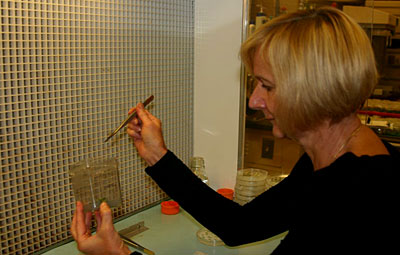 The diminutive transgenic orange plants await the opportunity to prove themselves against the Asian citrus psyllid on its home turf in Florida while the required permits and approvals are being secured. Aldwinkle said that he hopes to have some results of the trials within a year.

Kress, president of Southern Gardens Citrus Inc., one of the largest citrus growers and processors of not-from-concentrate orange juice in Florida, is in the process of continuing the overall research in Florida through evaluation of disease resistance on a commercial basis. He is optimistic that the work will have tremendous economic benefits. "It would also have a positive environmental impact by reducing insecticide sprays, because in Florida, trying to eliminate the Asian citrus psyllid is as daunting as trying to get rid of mosquitoes," Kress said.