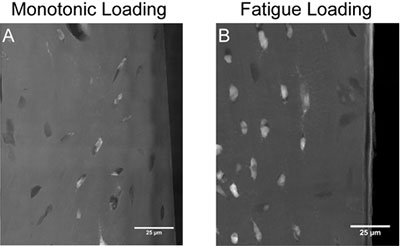 Garry Brock
Transmission X-ray microscope images of damage generated in a bone sample and stained with lead-uranyl acetate. White is the staining of microdamage, gray is bone and black is background. On the left is one-time loading of the sample, and on the right is repeated loading.

From athletes to individuals suffering from osteoporosis, bone fractures are usually the result of tiny cracks accumulating over time - invisible rivulets of damage that, when coalesced, lead to that painful break.

Using cutting-edge X-ray techniques, Cornell researchers have uncovered cellular-level detail of what happens when bone bears repetitive stress over time, visualizing damage at smaller scales than previously observed. Their work could offer clues into how bone fractures could be prevented.

Using the high-energy hard X-rays at SLAC's synchrotron, the researchers produced images of damage in sheep bone at a resolution of 30 nanometers - several times better than standard imaging via X-ray microcomputed tomography, which is at best 2-4 microns in resolution. (A nanometer is one-billionth of a meter. For comparison, the width of a human hair is about 70 microns, or 70,000 nanometers.)

"In skeletal research, people have been trying to understand the role of damage," said van der Meulen, whose research is called mechanobiology - how mechanics intersects with biological processes. "One of the things people have hypothesized is that damage is one of the stimuli that cells are sensing."

The inability of cells to repair microdamage over time ultimately contributes to the failure and breaking of bone, van der Meulen said. Until now, visualization techniques of microdamage were limited to lower resolution images. More detailed bone features, such as the small spaces called lacunae, where cells reside, and the microscopic canals between them, called caniliculi, were not visible.

The matchsticks were "damaged" in the lab at various levels: Some received 20,000 cycles of "loading" in bending; others received a single dose of loading; and others were notched before loading. All samples were treated with a lead-uranyl acetate X-ray negative stain that seeps into porosity caused by damage in the bone tissue. Then sections from the loaded segment were polished to 50-micron thicknesses.

A greater amount of stain was seen in sections subjected to repetitive stress. But instead of seeing new surfaces formed by damage, or cracks, as was expected, the researchers observed damage in the cellular structures. The X-rays picked up the dye within existing, intact structures, like the lacunae where the cells sit, and in the caniliculi.

"The tissue is not breaking, but rather, there is staining within the cells," Brock said.

Added van der Meulen: "We were surprised by how cell-based the staining was, as opposed to forming lots of new surfaces in the material."

In osteoporotic individuals, including many postmenopausal women, fractures usually occur in the forearm, spine and hip. van der Meulen's team is trying to understand why these fractures occur by studying nano- and microscale changes in bone tissue.

They are also exploring the possibility of studying whether a class of osteoporosis drugs called bisphosphonates, which reduce the overall rate of hip fractures but can lead to "atypical femoral fractures," affect nanoscale damage processes. These unusual fractures occur at sites that normally do not fracture with osteoporosis such as in the middle of the bone shaft. The new damage visualization method could lend new insights in future studies.

Co-authors of the paper include Anthony Ingraffea, the Dwight C. Baum Professor of Engineering and an expert in fracture mechanics; graduate student Grace Kim; and staff members at the SLAC National Accelerator Laboratory including Joy Andrews and Piero Pianetta. The research was supported by the National Institutes of Health and the U.S. Department of Energy.