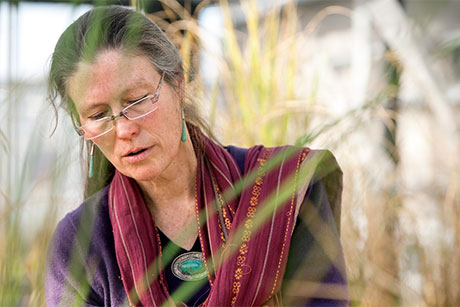 With fewer than a dozen flowering plants accounting for 80 percent of humanity’s caloric intake out of 300,000 species, people need to tap unused plants to feed the world in the near future, claims Cornell plant geneticist Susan McCouch in the Comment feature of the July 4 issue of Nature.

To keep pace with population growth and rising incomes around the world, researchers estimate that food availability must double in the next 25 years, according to the paper.

The biodiversity stored in plant gene banks coupled with advances in genetics and plant breeding may hold the keys for meeting the demands of more food in the face of climate change, soil degradation and water and land shortages, according to the paper.

For example, after screening more than 6,000 varieties from seed banks, plant breeders identified and crossbred a single wild species of rice, Oryza nivara; the result is a variety that has protected against grassy stunt virus disease in almost all tropical rice varieties in Asia for the past 36 years, the paper states. Similarly, by 1997 the value of using crop wild relatives as sources of environmental resilience and resistance to pests and diseases led to an estimated $115 billion in annual benefits to the world economy.

Though seeds are readily accessible in 1,700 gene banks throughout the world, “they are not used to their full potential in plant breeding,” McCouch said.

At present, it is difficult for breeders to make use of the wealth of genetic material in seed banks because of a lack of information about the genes in most plants and the traits they confer, she said. Due to the time and effort required to identify and then use wild and unadapted genetic resources, “a breeder must have a good idea about the genetic value of an uncharacterized resource before attempting to use it in a breeding program,” McCouch said.

In the paper, McCouch and colleagues outlined a three-point plan to address these constraints:

The estimated cost for such a systematic, collaborative global effort to help characterize the genetic resources needed to feed the future is about $200 million annually, according to McCouch.

“This seems like great value, given that as a society we spend about $1 billion each year to run CERN’s Large Hadron Collider near Geneva, Switzerland, and up to $180 million on a single fighter jet,” said McCouch.