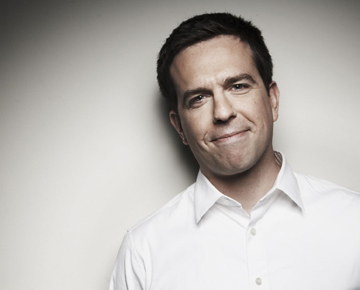 Life will imitate art when Ed Helms, the actor who portrayed the fictional Cornell alumnus Andy Bernard ’93 on the television comedy “The Office,” speaks at Senior Convocation on Saturday, May 24, during Cornell’s 2014 Graduation Weekend. He will speak at noon in Schoellkopf Stadium, and the event is open to the public.

“Ed Helms will be the perfect graduation speaker. He’s entertaining and he’s a comedian – something that the Class of 2014 was looking for,” said Jennifer Lee ’14 (School of Hotel Administration), chair of the students’ Senior Convocation Committee, which chooses the speaker. “The bonus is that Ed played a character who went to Cornell, so we feel a real kinship with him. For all Cornellians, he has a place in our hearts.”

After graduating from Oberlin College in Ohio, Helms honed his writing and performing skills in New York City with sketch comedy companies. Developing his humorous dexterity, he served four years as a senior correspondent on “The Daily Show with Jon Stewart.” 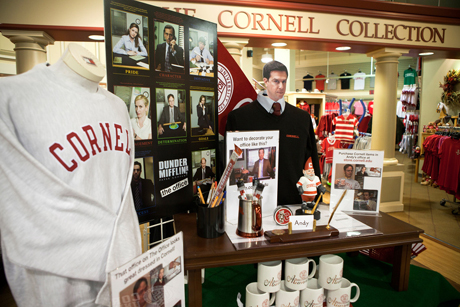 Among his acting credits, Helms played Stu in the “Hangover” trilogy. Helms’ other film credits include “We Came Together,” which recently premiered at the Sundance Film Festival; “We’re The Millers”; “The Lorax,” based on the Dr. Seuss children’s book; the Duplass brothers’ “Jeff, Who Lives at Home”; and Miguel Arteta’s “Cedar Rapids,” for which Helms was the executive producer. He will begin production on Paramount’s reboot of the classic comedy “The Naked Gun,” continuing the misadventures of Frank Drebin.

Beyond the spoken word, Helms plays a mean banjo. His band, The Lonesome Trio, which he formed with two Oberlin buddies, still performs at bluegrass festivals. In 2010, Helms co-founded The L.A. Bluegrass Situation, a music festival in Los Angeles, and its sister website, TheBluegrassSituation.com, providing news and resources for fans of Americana, Bluegrass and Old Time music.

Helms has worked closely with Malaria No More, a nonprofit organization at the vanguard that works to eradicate malaria worldwide. He sits on the advisory board for Education Through Music LA, which builds curriculum and funds music education in Los Angeles area public schools.

In his role on the Emmy Award-winning “The Office,” Helms played Andy Bernard, a bumptious sales director at paper company Dunder Mifflin in Scranton, Pa. Bernard is a zealously proud Cornellian; he once told a colleague “my blood runs Big Red.” He minored in history and graduated in “just four years.” He often mentions that he sang in an a cappella group, Here Comes Treble.

In the show’s final episode, Bernard resigns from Dunder Mifflin and lands a job in his alma mater’s admissions office. “The weird thing is I’m exactly where I want to be – I just got my dream job at Cornell, and I’m still just thinking about my pals. Only now, they’re the ones I made here,” the melancholy Bernard says. “I wish there’s a way to know you’re in the good old days before you’ve actually left them … someone should write a song about that.”