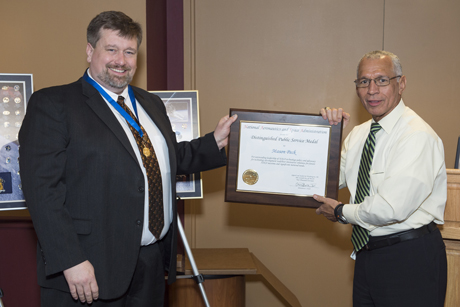 NASA/Aubrey Gemignani
NASA administrator Charles Bolden presents Mason Peck, left, with the NASA Distinguished Service Medal during a March 7 ceremony at NASA headquarters in Washington. Peck was recognized by the space agency for his outstanding service and leadership during his tenure as NASA chief technologist.

Mason Peck, associate professor of mechanical and aerospace engineering, who served as NASA’s chief technologist from January 2012 to December 2013, received the agency’s Distinguished Public Service Medal during a March 7 ceremony.

“This is an extraordinary honor, and I’m humbled to be in the company of past recipients,” Peck said. “NASA is where we can dream big. Serving at the agency in this capacity was a once-in-a-lifetime opportunity to contribute to the kinds of technologies, exploration and science that define who we are and what we can achieve if we put our minds to it.”

Peck, who researches spacecraft systems at Cornell and leads several high-profile satellite research programs including CUSat and Violet, was the agency’s principal adviser and advocate on matters of technology policy and programs.

His accomplishments at NASA included creating NASA’s Asteroid Grand Challenge, which asks the nation to work together to find all asteroid threats to human populations and know what to do about them. He developed NASA’s first agencywide space technology investment plan in decades and oversaw the establishment of the new Space Technology Mission Directorate. His has helped build bridges from NASA to thousands of do-it-yourself spacecraft engineers in the U.S. and around the world, the so-called “maker community.”

Another of his responsibilities was communicating how NASA technologies benefit space missions and the day-to-day lives of Americans.

The Distinguished Public Service Medal is NASA’s highest recognition to any nongovernment individual. The award honors an individual “whose distinguished service, ability or vision has personally contributed to NASA’s advancement of the United States’ interests. The individual’s achievement or contribution must demonstrate a level of excellence that has made a profound or indelible impact to NASA mission success.”

Past recipients of the award include Carl Sagan, Neil DeGrasse Tyson, Robert Heinlein and Gene Roddenberry.