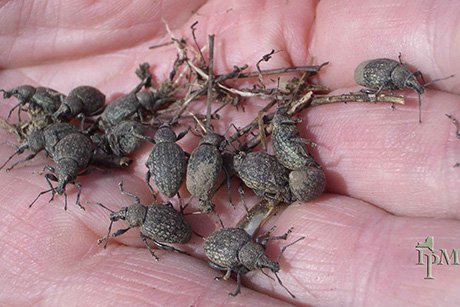 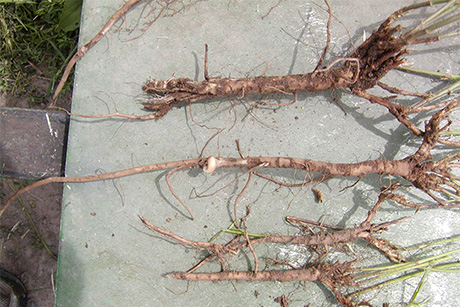 Cornell plant breeders have released a new alfalfa variety with some resistance against the alfalfa snout beetle, which has ravaged alfalfa fields in nine northern New York counties and across the St. Lawrence River in Canada.

There are no other known alfalfa snout beetle infestations in North America, but the pesky beetle has been spreading. The snout beetle’s larvae feed on and damage the alfalfa plant’s roots, limiting yields for this major livestock feed.

“We are the only ones who can work on [this pest], because it is so regional,” said Don Viands, professor of plant breeding and genetics and director of the Forage Breeding Project, where Jamie Crawford, a research support specialist, and Julie Hansen, a senior research associate, have done most of the breeding work.

The new resistant cultivar, called Seedway 9558 SBR, has been in development since 2003, along with six other populations. But Seedway 9558 SBR has provided the most resistance while also maintaining the highest yields.

“This initial variety is better than anything else, but we feel we can still do better,” Viands said. “We are trying to get a variety that is at least twice as good as this one.”

For effective control, the resistant alfalfa should be planted with a larvae-killing nematode that has been studied and released by Elson Shields, professor of entomology, said Viands.

In the alfalfa-breeding process, the researchers started with 16 alfalfa populations that they later whittled down to seven. Bred from an older variety, Seedway 9558 SBR went through seven breeding cycles. Each summer, plants were planted in deep trashcans in a greenhouse and similarly inoculated with alfalfa snout beetle eggs. After up to six weeks, Crawford selected up to 125 of the largest plants with the least root damage out of 2,000-3,000 plants per population. These were then replanted, cross-pollinated so they produced seed, and the seeds were replanted the following year to build resistance levels in each population.

“We are making significant progress in developing resistance, but it has been very slow,” Viands said. The first-year base crop for Seedway 9558 SBR was 13 percent resistant, compared with 38 percent after seven cycles. “Normally it takes four to five cycles to develop resistance, but this [alfalfa snout beetle resistance] may have multiple genes, so it is taking time,” Viands added, noting that it is still unknown exactly what mechanism allows the plant to deter the beetles.