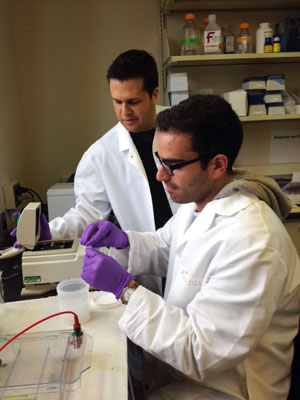 Unlocking ways to monitor a key nutrient, Cornell research unveils a new method to test for zinc deficiency, a vital measurement that has posed problems for doctors and scientists.

After iron, zinc is the most abundant trace mineral in human cells, playing a role in immunity, protein synthesis and wound healing. Dietary zinc deficiency affects one-quarter of the world’s population, so accurate and sensitive measurements are needed. Measuring the micronutrient is complex because cells efficiently export zinc, which can be toxic.

The study, published March 20 in the journal Nutrients and led by first author Spenser Reed ’14, uses ratios between two red blood cell fatty acids. One of those fatty acids, linoleic acid, requires a zinc-dependent enzyme to produce the second fatty acid, dihomo-gamma-linolenic acid (DGLA). In other words, without zinc, DGLA doesn’t get made.

By measuring the abundance of linoleic acid relative to DGLA, and vice versa – the ratio of linoleic acid to DGLA becomes higher as zinc deficiency increases – the researchers have identified a potentially sensitive biomarker for testing the body’s zinc status.

“One of the major challenges is to find a parameter that can detect differences between mild zinc deficiency and severe zinc deficiency, according to [standards set by the] the World Health Organization,” said Elad Tako, the paper’s senior author, a physiologist at the U.S. Department of Agriculture’s Robert W. Holley Center for Agriculture and Health and a courtesy food science professor at Cornell. While more study is needed, the method holds promise as a nuanced biomarker, Tako added.

The researchers used broiler chickens in the study, partly due to their omnivorous appetites – which allowed the researchers to feed them purified diets – and because of their red blood cells, fatty acids and genetic similarities to humans.

In the study, one set of chickens was fed a controlled, purified diet with adequate zinc, while another set was fed a zinc-deficient but otherwise identical diet.

“We had to make sure that … the only difference was the dietary zinc and nothing else,” said Reed, who works in Tako’s lab. The researchers examined weekly blood samples, isolated the red blood cells and extracted fatty acids to determine the ratios of linoleic acid to DGLA.

Corroborating their findings, the researchers also examined zinc levels in feather and nail samples and measured the expression of 16 intestinal and liver genes related to zinc metabolism.

To measure a subject’s zinc status, a wide variety of biomarkers are necessary, Reed said. The researchers hope to “add to the compendium of different markers that could be sensitive to zinc deficiency,” said Reed, who plans to complete ongoing experiments in Tako’s lab after graduating, with an eye toward medical school later. The researchers also plan to study the use of the ratio for testing zinc levels under natural diets.