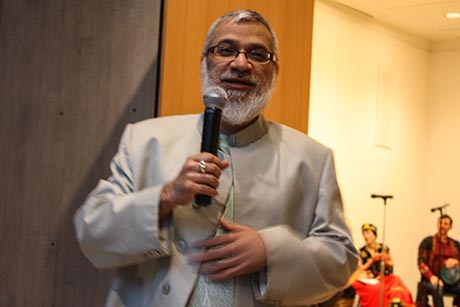 Joshua Porter
Associate professor Shawkat Toorawa emcees "Poetry and Pastry" at the Johnson Museum, with community readings of poetry from around the world. 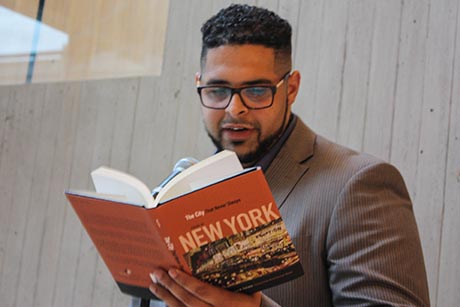 A multicultural, multilingual celebration of the written and spoken word – and dessert – drew more than 100 people to the Herbert F. Johnson Museum of Art’s Wing Gallery on April 16.

Organized by the Department of Near Eastern Studies, “Poetry and Pastry: An Elegant Soiree of Near East and New York Poetry” marked National Poetry Month and Cornell’s Sesquicentennial. It also celebrated the release of “The City That Never Sleeps: Poems of New York” (SUNY Press), an anthology edited by associate professor of Near Eastern studies Shawkat Toorawa.

Toorawa organized and emceed the event, and more than two dozen readers – faculty, Cornell and area high school students, and guest poets – read poetry of the Near East and other world cultures in their original languages, and poems of New York City from the anthology.

“This event began as an opportunity for our students to read poetry in the languages in which they were learning,” Toorawa said, adding that “I went to the departments and encouraged people to come read. I wanted to have at least Arabic, Turkish, Persian and Hebrew represented, in as much as we teach them in [our] department.”

The result was readings in, and translations from, those four languages and others, including Urdu, Berber, Belarusian, German and English.

Cornell’s Middle East Music Ensemble performed during pastry breaks, and attendees were invited to view a related exhibition pairing poems with artwork from the museum’s collection, curated by Toorawa and students.

Guest poets Anne Pierson Wiese (who wrote the book’s foreword) and Iman Mersal (author of five books of poetry in Arabic) also read at the event.

The anthology features such writers as Maya Angelou, Hart Crane, Carl Sandburg, Sara Teasdale and Walt Whitman. Toorawa said he wanted the book “to have an organic purpose,” and chose a thematic structure to organize the selections, by Morning, Day, Evening, and Night.

“I excluded poems that didn’t do that – but there was one poem I was stuck on, and decided to make it the opening poem, the entry into the whole book,” he said.

He chose that poem, “New York” by visiting assistant professor of English Valzhyna Mort, before he knew its author was at Cornell. She read it in Belarusian, prefacing by saying its images express the impressions “of a character perhaps jetlagged on coming to New York.”

The celebration reprised a similar event and exhibition held in 2011, conceived in a class then reading another New York anthology –  a concept Toorawa and his students set out to expand and improve upon – and during informal poetry gatherings held in the museum’s former Two Naked Guys Café. Toorawa also hosts occasional poetry nights on campus.

“He really enriches poetry on our campus,” faculty member and former Tompkins County Poet Laureate Gail Holst-Warhaft said of Toorawa. “He brings us all together, has us read poetry and listen to the poems in other languages.”

Near Eastern Studies chair Lauren Monroe called the event turnout “a tribute to the power of the word” and thanked the poets for “the luxury of lingering over words.”

The art installation “New York, New York… It’s a Hell of a Town” is on display through April 26, pairing words and images including a Walker Evans photograph beside an excerpt from Bob Dylan’s “Desolation Row.”

W.H. Auden’s “September 1, 1939” is framed next to a 1948 portrait of the author by Alfonso Ossorio. Retired museum director Franklin Robinson, who helped Toorawa launch the 2011 exhibition, noted that Ossorio was a gay artist depicting the semi-closeted Auden, seemingly within the setting of his poem – which begins: “I sit in one of the dives / On Fifty-second Street / Uncertain and afraid.”