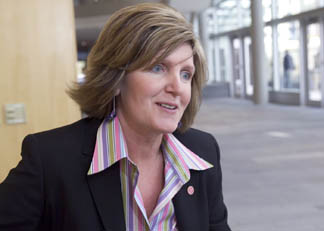 Robin Davisson, the wife of Cornell's newly named president, David Skorton, calls herself a "pescovegetarian," meaning other than eating fish, she is a vegetarian, like her husband. (And yes, she owns a Moosewood cookbook). Davisson also runs, not competitively, but she has completed a few half marathons. Given that she is a distinguished cardiovascular researcher, these personal practices fall in line with her work.

Davisson, an associate professor of anatomy and cell biology as well as of radiation oncology in the University of Iowa's College of Medicine, focuses her research on the basic mechanisms of function, control and signaling in the cardiovascular system. Her work has included the use of functional genomics to understand the genetic causes of high blood pressure and how, on a molecular level, this condition might lead to heart failure. Functional genomics is the area of genetics that tries to determine the function of genetic information in a cell and how it applies to the entire organism.

At Cornell, Davisson said she looks forward to continuing her research in these areas, as she will join the Cornell faculty with a joint appointment in the Department of Biomedical Sciences in the College of Veterinary Medicine on the Ithaca campus and in the Department of Cell and Developmental Biology at Weill Cornell Medical College in New York City.

"We study cardiovascular diseases and use genetic tools and mouse models that are well represented in the biomedical sciences department," Davisson said. She added that the "mouse house" in the College of Veterinary Medicine -- the 1,200-square-foot Cornell Core Transgenic Mouse Facility that can create mice with specific knockout genes -- will also be important for her functional genomics work.

"At Weill, there's the opportunity for different kinds of facilities, excellent colleagues and an association with clinical medicine," she said.

Born and raised in Cedar Rapids, Iowa, Davisson received her bachelor's degree in biology and physiology in 1988, her master's degree in psychology in 1991 and her Ph.D. in pharmacology in 1994, all from the University of Iowa.

While she said it is hard to leave friends, colleagues, family and the research program she built up there, she adds that she is excited for new adventures in Ithaca, a place that she and Skorton will be moving to together for the first time.

"There will be new opportunities coming here -- a different intellectual environment with new ideas, new colleagues, new students -- in ways I don't yet know which will change the way I look at what I study," she said. "When you are in a place for a long time, you know how people think and how ideas evolve in that place. It'll be interesting to be with people who will have new ways of thinking."

"She's a respected scientist in areas that will be of immense benefit to Cornell," said Frank H.T. Rhodes, Cornell president emeritus. "She's also proved to be a major influence on the campus of Iowa, where with great inventiveness and creativity she succeeded in making a big institution one where people feel valued and at home -- and that's a very critical skill."

In 2002, Davisson's discovery with colleagues that a laboratory-bred mouse with high blood pressure may be a good model for studying pregnant women with the disorder preeclampsia led to a Harry Goldblatt Award in cardiovascular research from the American Heart Association. Preeclampsia, characterized by high blood pressure and renal disease in the last trimester, inflicts 5 to 8 percent of all pregnancies. At worst, it can lead to fetal death and coma for women.

In 2005, Davisson received a five-year, $500,000 National Established Investigator Award, one of only 25 granted by the American Heart Association, to study how oxidative stress in the nervous system contributes to heart disease. Oxidative stress refers to an accumulation of destructive molecules called free radicals that break down cells and proteins using the same chemical reaction that turns iron to rust. Davisson's team experiments with using antioxidant molecules to counteract the effects of free radicals, thereby normalizing signals between the central nervous systems and the cardiovascular system in the brains of mice with heart failure.

As an associate professor, she teaches neuroanatomy and genetics to medical, dental and graduate students. She also developed a popular course, "Survival Skills for a Research Career," that addresses communication, grant-writing and other skills required to succeed in academia. She received a 2005 Outstanding Mentor Award from the University of Iowa's Graduate College for mentoring undergraduate, graduate and postdoctoral students in research, teaching and career development.

Along with being widely published in her field, she has given presentations throughout the United States, as well as in South America, Europe and Asia.

Davisson also has taken an active stance on political issues relevant to academia. In August 2005, she and her husband published an opinion piece in The Wall Street Journal that discussed the drop in the number of talented international students traveling to the United States to study since Sept. 11, 2001, because of difficulties in obtaining visas and fears of discrimination. The article called for a need to balance "secure borders and open doors" in an effort to maintain "U.S. competitiveness, intercultural dialogue and understanding and, ultimately, a more secure world."

Davisson acknowledged the sadness of leaving a place she and Skorton hold dear.

"Iowa will always have a special place in our hearts, but we're also excited to move on to the next era in our lives."