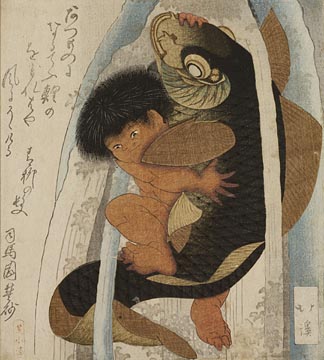 Julie Magura/Johnson Museum
"Kintaro and Carp in a Waterfall," created ca. 1820 by Japanese artist Totoya Hokkei. The carp climbing a waterfall represents development and success, and the boy, Kintaro, in hanging on, is fighting for growth.

Cornell University's Herbert F. Johnson Museum of Art will exhibit "Japanese Poetry Prints: Surimono From the Schoff Collection" Jan. 14 through March 19. It is the first exhibition outside of Japan for the 19th-century woodblock prints, all from the collection of Joanna Haab Schoff '55.

Surimono, which can be translated as "printed thing," were privately produced, limited-edition prints commissioned by poetry groups to be distributed among friends for special occasions, often for the lunar New Year. The artwork and poetry on the prints were the result of unique collaborations among poets, artists, calligraphers and printers. Clever integrations of text and image were combined with the most advanced printing techniques available to produce deluxe presentation sheets for a sophisticated and highly literate audience.

This exhibit presents superb examples from the early 19th century, considered the peak of surimono production. Forty-six surimono from the Schoff collection were previously exhibited at the Ota Museum of Art in Tokyo in 2000. The Johnson Museum exhibition will feature more than 70 prints, both from the Ota exhibition and others never before exhibited.

"The Schoffs lived in Japan in the 1950s and began to learn about and admire Japanese art," said Ellen Avril, curator of Asian art and chief curator of the Johnson Museum. "After returning to the United States, they first collected Toulouse-Lautrec prints and were led by the Japanese influence on late 19th-century French art to seek out Japanese woodblock prints. The elegance and technical sophistication of surimono, along with the literary wit conveyed, especially appealed to Joanna, and her passionate collecting of surimono was under way." The exhibit is accompanied by a fully illustrated catalog by Cornell Ph.D. candidate and guest curator Daniel McKee, who will lead a tour of the exhibition Thursday, Jan. 26, at noon, as part of the museum's free Art for Lunch series.

The surimono collection is one of several new exhibitions opening in January at the Johnson, including a Cornell art faculty show, Jan. 21-March 12; "Yangtze Remembered: The River Beneath the Lake," a display of photographs by Linda Butler, Jan. 21-March 26; "Japonisme : European Artists and the Allure of Japan," Jan. 21-March 19; and "Story Cloths of Bali," Jan. 28-March 26.

The museum will host a Light in Winter gallery night Jan. 20 from 5 to 7 p.m. and an opening reception for all of its winter exhibitions, Friday, Jan. 27, from 5 to 7 p.m. with music and refreshments. The events are free and open to the public.