For Sandeep Kishore, a second-year M.D.-Ph.D. student at Weill Cornell Medical College, the Tri-Institutional Forum on Neglected Diseases was a long time coming.

Fast forward eight years: Last November, Weill Cornell Dean Antonio Gotto sent out a call to faculty and students to find new ways to support sub-Saharan Africa development as part of Cornell's Africa Initiative. Working with Weill Cornell faculty and students, as well as with colleagues from the national organization Universities Allied for Essential Medicines, Kishore began talking to groups that might be interested in organizing a forum on neglected diseases.

"We were floored by the response from the community," Kishore said. "What began as a tiny forum grew exponentially."

On Jan. 30, when the event took place in Weill Cornell's Uris Auditorium, Kishore's "tiny forum" included some of the most important names in global health: Peter Hotez, a Tri-Institutional M.D.-Ph.D. alumnus and director of the Global Network for Neglected Tropical Disease Control; Harold Varmus, a Nobel laureate in medicine and president of Memorial Sloan-Kettering Cancer Center; and Joanna Rubinstein, former director of Global Health Initiatives at the U.N. Millennium Project and current director of Strategic Initiatives at the Earth Institute at Columbia University. Among the Weill Cornell experts were Warren Johnson, chief of the Division of International Medicine and Infectious Disease; Carl Nathan, chairman of the Department of Microbiology and Immunology; and Gotto; as well as others from the Tri-Institutional and New York City global health community. 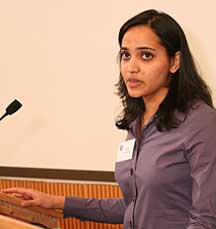 Richard Lobell Photography
Lakshmi Sonbuchner, a Tri-Institutional M.D.-Ph.D. candidate in the laboratory of Kirk Deitsch at Weill Cornell Medical College, talks about her work researching the pathogenesis of malaria and the unique biological attributes of parasites of the genus Plasmodium.

During the forum, invited speakers introduced and defined neglected diseases and discussed current conditions throughout the Third World.

The neglected diseases are commonly defined as a core group of 13 tropical parasitic and bacterial infections that predominantly affect the developing regions of sub-Saharan Africa, Asia and the Americas. Many diseases can be effectively and inexpensively treated with available drugs; nevertheless, at least 1 billion people -- one-sixth of the world's population -- suffer from one or more neglected tropical diseases, according to the World Health Organization.

Beyond defining these diseases, the forum also introduced students to faculty and global health leaders to work on future initiatives.

"The interest has always been here, we're just hoping to centralize and harness it. And we're very proud to have a medical college that is taking on this issue," Kishore said.

The issue of global health has taken root throughout the medical college, from new groups of just a few students interested in the problem to diverse, large-scale collaborations between Ithaca and New York City.

"There is a whole generation that has been inspired to undertake this endeavor in global public health," said Gotto. Currently 40 percent of Weill Cornell students take international electives abroad in dozens of countries, the majority of which are in the developing and Third World, where students can have a significant impact on local health care.

Speaking to students about Weill Cornell programs and affiliations in the developing world, Johnson said, "You as students and graduates can get involved and make a difference. It doesn't happen instantly, but over years you can see the impact that some of the people who have sat here, in this auditorium, have made."

A common refrain heard throughout the forum was that universities, particularly the Tri-Institutional partners and Cornell in Ithaca, are uniquely positioned to lead the fight against developing-world disease by virtue of their specialized knowledge spread across many areas. For Kishore and others who are still in school, there are also vast social resources to be mined.

"There's a lot of power between these institutions, and if we combine forces, we could be a world leader," Kishore said. "This forum isn't the end, it's a kickoff point, a time to begin conversations."