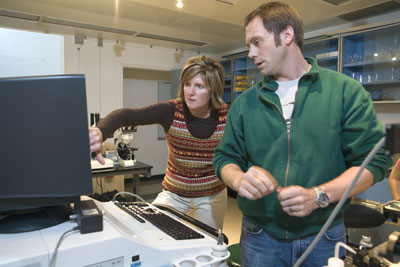 February is American Heart Month, the time when American Heart Association volunteers and staff ramp up efforts to raise awareness about cardiovascular disease -- the leading cause of death in the U.S.

Scientists across Cornell are involved in the effort to combat heart disease and stroke in a variety of ways -- from investigating its causes and contributing factors to testing possible pathways for treatments. This Chronicle story is the first of three to highlight the work of Cornell researchers who are supported in part by funding from the AHA.

Within seconds of a heart attack, the body senses a problem. Signals from the distressed heart muscle travel to the brain, which reacts by ramping up sympathetic nervous system activity -- instructing the heart to beat harder and faster to compensate for its damaged tissue.

But over time, the response creates new problems. Instead of settling down when the crisis is over, the nervous system stays in overdrive, ultimately creating more stress for the heart and often leading to eventual heart failure.

The initial response is adaptive, says Robin Davisson, professor of biomedical sciences and one of several Cornell researchers supported in part by the American Heart Association. "The goal of the heart is to get oxygenated blood out to all of your tissues, and if it's not pumping properly, which is what happens after a heart attack, that increased sympathetic nerve activity to the heart allows it to function as normally as it can."

Davisson, a recipient of an AHA Established Investigator Award, and colleagues are piecing together clues about how the system works -- with hopes of finding ways to return it to normal after a heart attack and preventing further damage.

"We're trying to understand two parts of that puzzle," Davisson says: "How does the brain know that the heart is having trouble; how does that sympathetic activation occur? And then, what is the impact of that on the heart?"

In previous work, the team found that free radicals (highly reactive and unstable molecules) play an important part in activating the chronic overdrive response. By developing a genetic form of a free radical scavenger -- a molecule that hijacks and disarms free radicals -- and injecting it into two key areas in the brain, the team was able to reduce sympathetic nerve activity and heart failure in mice following a heart attack.

Now the team is studying genetic changes as they occur over time in key brain regions, focusing on two particular gene transcription factors that are known to be activated by free radicals, or redox-regulated.

"We hypothesized that redox-regulated activation of these transcription factors was somehow involved in this process in the particular brain regions that we're interested in," Davisson says.

To test the idea, the team linked the transcription factor activation with activation of the enzyme luciferase -- which causes fireflies to glow when combined with the substrate (the molecule on which the enzyme acts) luciferin.

The researchers are currently using in vivo bioluminescence imaging, an innovative microscopy technique that can detect tiny amounts of light in organic tissue, to study the brains of mice in the hours and days following a heart attack. By injecting the luciferase into the two brain regions of interest and simultaneously inducing a heart attack, they can map activation of the redox-regulated transcription factors -- simply by recording tiny emissions of light from the key areas.

"So over time we can -- in vivo, in real time -- track the activation of these transcription factors in specific regions of the brain," Davisson says.

The next steps will be to test whether the observed activation is the direct result of free radicals and to see if interfering with the activation can actually inhibit the sympathetic response that leads to heart failure. That knowledge could lead to treatments that could extend the lives of humans who have suffered a heart attack.

For Davisson, the AHA grant has given her the freedom to investigate a process she's been intrigued by since she did an undergraduate honors thesis on the effects of stress on the cardiovascular system.

"I've always been fascinated with the cardiovascular system," she says. "And it's so cool to get to come in every day and have a chance to make some important discovery. I've been so lucky to have great students and other staff in the lab over the years. The joy of training them and sharing in the discovery process is just amazing."