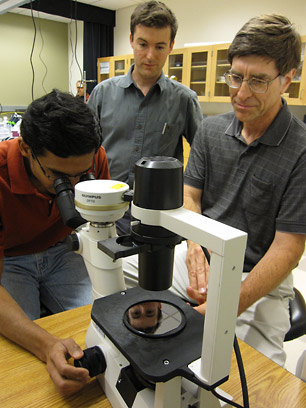 Ted Boscia/College of Agriculture and Life Sciences
From left, Vinay Pagay, Abraham Stroock and Alan Lakso examine a silicon wafer that will be used to build microsensors to monitor water stress in grapevines.

Fifteen years ago, when Alan Lakso first sought to enlist Cornell's nanofabrication laboratory to develop a tiny sensor that would measure water stress in grapevines, the horticultural sciences professor ended up back at the drawing board.

It wasn't until Abraham Stroock, associate professor of chemical engineering, had a breakthrough of his own that Lakso's vision began to take shape. Stroock's lab recently developed a synthetic tree that mimics the flow of water inside plants using a slab of hydrogel with nanometer-scale pores. At last Lakso had access to the technology to move forward.

The device is an embedded microsensor capable of measuring real-time water stress in living plants. In theory, the sensor will help vintners strike the precise balance between drought and overwatering -- both of which diminish the quality of wine grapes.

"To manage for optimum stress," said Lakso, a researcher at the New York State Agricultural Experiment Station in Geneva, "we need to monitor ... exactly what's going on in the vine."

With Vinay Pagay, a graduate student with degrees in computer engineering and viticulture, the team is working at the Cornell Nanofabrication Facility in Ithaca to develop 4-inch diameter silicon wafer protoypes, each containing approximately 100 microsensors. They have also begun collaborating with Infotonics, a firm in Canandaigua, N.Y., that specializes in microelectromechanical systems (MEMS), to plan commercialization of the sensors. The partnership applies cutting-edge engineering to practical agricultural concerns.

The team hopes to design a sensor that will transmit field readings wirelessly to a central server; the data will then be summarized online for the grower. The concept has already received attention from E. & J. Gallo Winery in California as well as researchers and industry leaders from Australia, Spain and Italy. "It's not just for the big growers," Lakso said. "We hope the micro-manufacturing will provide low-cost sensors for small growers as well."

Looking ahead, the team is pursuing alternative sensors that could enhance research in fields from food science to forestry. They have begun development of a "multi-use sensor" that redirects water flow inside the plant through a shunt. In this case, the sensor could measure the flow of water and mineral nutrients through the plant, in addition to water stress. Pagay described it as "a lab on a chip."

Beyond winemaking, the technology has implications for manufacturing, food processing and electronics. Team member Taryn Bauerle, assistant professor of horticulture, described how such sensors could be implanted throughout trees in a forest ecosystem to measure water use and nutrient flow on a large scale with unprecedented accuracy. "All of these [researchers'] brains are coming together," she said. "There's no limit to where we can take this type of technology."

Chris Bentley '10 is a student intern with CALS Communications.