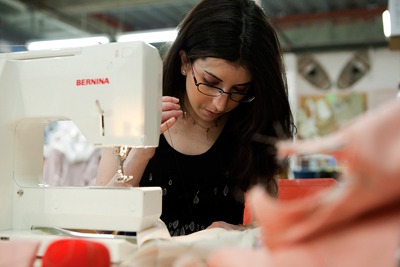 Using conductive cotton threads, Cornell senior Abbey Liebman has created a solar-powered jacket that keeps you wired wherever you go.

With ultra-thin solar panels for trim and a USB charger tucked into the waist, the Southwest-inspired garment captures the sun's rays to charge cell phones, iPods and other handheld devices. Liebman designed the coat, which debuted on the runway at the 26th annual Cornell Design League (CDL) Fashion Show March 13, for its wearer to stay plugged into technology -- whether in the desert or the urban jungle.

"I thought about being in the middle of the desert and in need of your phone. How would you keep it charged?" said Liebman, fiber science and apparel design (FSAD) major. "It fits the city lifestyle, too. We're always on the go, and you don't want to be slowed down because your phone is dead."

Liebman's idea for an e-jacket arose from meetings with Juan Hinestroza, assistant professor of fiber science and director of the Textiles Nanotechnology Laboratory. The garment relies on Cornell-developed and patented technologies by Hinestroza and George Malliaras, associate professor of materials science and engineering. The two technologies used allow the coating of cotton with an precisely patterned layer less than 80 nanometers thick, resulting in a fabric that transmits current the same as a metal wire. 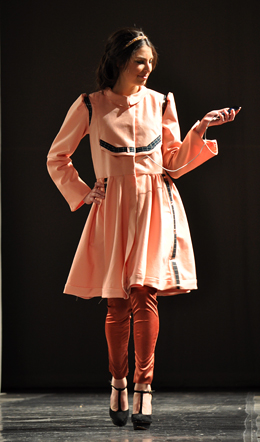 "The technology allows cotton to remain flexible and comfortable while being electrically conductive," said Hinestroza, who credits visiting scholars from Italian universities in Bologna and Cagliari for helping to refine the process. "Previous technologies have achieved conductivity, but the fiber became rigid or heavy, unlike our yarns, which are friendly to further processing, such as weaving, sewing and knitting."

As wearable electronics become mainstream, Hinestroza says that the technology could be embedded into T-shirts to measure heart rates or analyze sweat, sewn into pillows to monitor brain signals or applied to create interactive textiles with heating and cooling capabilities.

The solar-powered jacket is one of 10 pieces Liebman designed for the CDL show. Her classmate Beth Esponnette also displayed at the show a collection that merges high tech with high fashion.

Esponnette, a member of the Cornell Nordic ski team, developed a line of high-performance athletic wear that features such innovations as a cape that reverses into a picnic blanket, a jacket with a detachable pillow for a collar and a coat with a CambelBak hydration system hidden in an interior pocket.

"I want to redefine the way people see hiking and backpacking," Esponnette said. "These are multifunctional clothes that can enhance your experience and won't get in your way when you're active."

Esponnette sees everyday uses for her line, as well. The CamelBak-equipped jacket, for instance, would keep a person hydrated throughout the day. "I'll forget to drink enough water as I'm going to classes," she said. "But it would look odd to be hauling a CamelBak around all the time. This piece keeps it out of sight and makes it convenient." 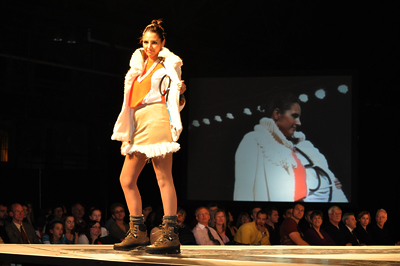 Mark Vorreuter
This outfit, designed by Beth Esponnette '10 and modeled by Remy Bhatia, HumEc '09, features a cape that reverses into a picnic blanket, a jacket with a detachable pillow for a collar and a coat with a CamelBak hydration system hidden in an interior pocket.

Esponnette and Liebman's functional fashion pieces shared the stage with original ensembles by dozens of other Cornell student designers at the CDL show, one of the largest student-run event on campus.

"Science shouldn't be far from art," Liebman said. "The idea is to combine technology and fashion in a way that's functional, but looks good, too."

Cornell offers the only fashion design program in the Ivy League and the only Ph.D. in apparel design in the United States. Both are in the College of Human Ecology's Department of Fiber Science & Apparel Design.