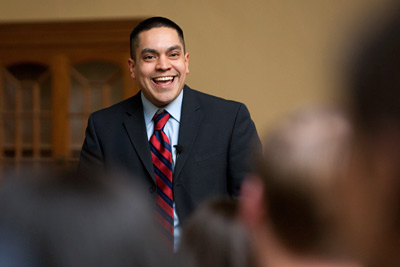 Robert Barker/University Photography
Gilbert Castellanos, an environmental scientist at the U.S. Environmental Protection Agency, spoke on "Science, the Environment and How Public Service Can Offer You the Chance to Make a Difference," March 4, as part of the Cornell Institute for Public Affairs' colloquium series.

Attention recent and soon-to-be graduates: Uncle Sam wants you; well, it's more like needs you. So why should you give up the chance to work in the lucrative private sector for a job as a public servant?

Because not only does the federal government need to fill more than a half million jobs in the next two years, but also because such positions offer a multitude of intangible benefits, said Gilbert Castellanos, an environmental scientist with the Environmental Protection Agency (EPA) in Washington, D.C., speaking at the Cornell Institute for Public Affairs colloquium March 4. These include help with student loan repayment, professional development and training, and a chance to do work on a global scale, he said.

"How else can you speak up for a country and establish policies that affect the world?" he asked. "I think working for the federal government is an opportunity to make a difference and make a change in the world."

Most needed are people to fill essential jobs -- those that are absolutely critical to the governance of the country -- in such areas as public health, security and protection, he said.

Castellanos has worked for the government since graduating from the University of California in 2001 with degrees in natural resources and anthropology. He was originally hired into the Army Corps of Engineers before being accepted into the EPA's two-year intern program. He is a negotiator for the Commission for Environmental Cooperation (CEC), an institution created within the North American Free Trade Agreement (NAFTA).

"A few years ago the negotiators on NAFTA, which included Al Gore, said, 'We need to put some environmental provisions into this trade agreement,'" Castellanos said of the CEC. Each of the three NAFTA members -- the United States, Canada and Mexico -- put in about $3 million a year. "The ministers of the commission sit down each year and ask what we are going to do with the $9 million to make sure we're addressing the environmental issues that are exacerbated through increased trade."

During the past year with the CEC, Castellanos has been working with community leaders to study the environmental impact of NAFTA and develop projects to reduce this impact. "There is an environmental effect of NAFTA that needs to be addressed, because, for example, each year you have more and more 18-wheelers passing through El Paso and heading to Canada," he explained.

Castellanos said more young people should consider a career in public service and not be deterred by misconceptions that working for the federal government only hires economists and scientists and offers low, noncompetitive salaries.

Upcoming CIPA lectures include the director of public administration and development at the United Nations March 11 and former assistant secretary general for the U.N. April 1.

Graduate student Sarah Perdue is a writer intern for the Cornell Chronicle.