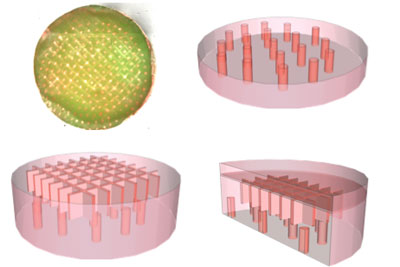 Victims of third-degree burns and other traumatic injuries endure pain, disfigurement, invasive surgeries and a long time waiting for skin to grow back. Improved tissue grafts designed by Cornell scientists that promote vascular growth could hasten healing, encourage healthy skin to invade the wounded area and reduce the need for surgeries.

These so-called dermal templates were engineered in the lab of Abraham Stroock, associate professor of chemical and biomolecular engineering at Cornell and member of the Kavli Institute at Cornell for Nanoscale Science, in collaboration with Dr. Jason A. Spector, assistant professor of surgery at Weill Cornell Medical College, and an interdisciplinary team of Ithaca and Weill scientists. The research was published online May 6 in the journal Biomaterials.

The biomaterials are composed of experimental tissue scaffolds that are about the size of a dime and have the consistency of tofu. They are made of a material called type 1 collagen, which is a well-regulated biomaterial used often in surgeries and other biomedical applications. The templates were fabricated with tools at the Cornell NanoScale Science and Technology Facility to contain networks of microchannels that promote and direct growth of healthy tissue into wound sites.

"The challenge was how to promote vascular growth and to keep this newly forming tissue alive and healthy as it heals and becomes integrated into the host," Stroock said.

The grafts promote the ingrowth of a vascular system -- the network of vessels that carry blood and circulate fluid through the body -- to the wounded area by providing a template for growth of both the tissue (dermis, the deepest layer of skin), and the vessels. Type I collagen is biocompatible and contains no living cells itself, reducing concerns about immune system response and rejection of the template.

A key finding of the study is that the healing process responds strongly to the geometry of the microchannels within the collagen. Healthy tissue and vessels can be guided to grow toward the wound in an organized and rapid manner.

Dermal templates are not new; the Johnson & Johnson product Integra, for example, is widely used for burns and other deep wounds, Spector said, but it falls short in its ability to encourage growth of healthy tissue because it lacks the microchannels designed by the Cornell researchers.

"They can take a long time to incorporate into the person you're putting them in," Spector said. "When you're putting a piece of material on a patient and the wound is acellular, it has a big risk for infection and requires lots of dressing changes and care. Ideally you want to have a product or material that gets vascularized very rapidly."

In the clinic, Spector continued, patients often need significant reconstructive surgery to repair injuries with exposed vital structures like bone, tendon or orthopedic hardware. The experimental templates are specifically designed to improve vascularization over these "barren" areas, perhaps one day eliminating the need for such invasive surgeries and reducing the patient's discomfort and healing time.

Eventually, the scientists may try to improve their tissue grafts by, for example, reinforcing them with polymer meshes that could also act as a wound covering, Spector said.

The work was supported by the Morgan Fund for Tissue Engineering and the New York State Office of Science, Technology and Academic Research.