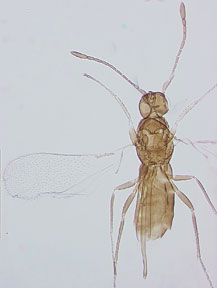 Serguei Triapitsyn
The tiny fairyfly Gonatocerus ovicenatus has been found in Geneva after not being seen since its initial discovery by Cornell scientists in 1915.

Two entomologists in search of one insect have discovered two others: a tiny wasp that hadn't been seen in North America in nearly 100 years, and one that has never been recorded here.

First found in Ithaca, N.Y., in 1915 by Cornell researchers M.D. Leonard and C.R. Crosby, the fairyfly Gonatocerus ovicenatus has not been collected on the continent since then, prompting some European entomologists to question whether it truly was established in North America.

But the wasp has now been spotted on Lombardy poplars planted along the roadside at the campus of the New York State Agricultural Experiment Station in Geneva, N.Y., by Cornell entomology professor Greg Loeb and University of California-Riverside researcher Serguei Triapitsyn, director of the Entomology Research Museum.

They also found another fairyfly species, Gonatocerus ater, which has never been recorded in the Western Hemisphere.

Both are of European origin and were likely accidentally introduced to North America with Lombardy poplars long ago.

The fairyfly wasps are about 1 mm-long parasitoids that lay their eggs inside the eggs of the leafhopper Rhytidodus decimaquartus. When the wasp eggs hatch, the larvae consume their host, killing the developing leafhopper. By doing so, they provide a natural control of the poplar pest, Loeb said.

Loeb and Triapitsyn had been collaborating on a study of a different kind of leafhopper -- one that can be a blight on Finger Lakes grape crops -- when they made the find.

Triapitsyn, who has an interest in parasitoid taxonomy and biology and was aware of the 1915 discovery, swept several areas for samples in addition to the collections the researchers were doing as part of their primary study.

"After failing to collect Gonatocerus ovicenatus wasps on the common native poplar, Populus deltoides, at several locations in upstate New York, imagine the excitement when, in a hotel room, I first found them while sorting sweep samples from the Lombardy poplars in Geneva," Triapitsyn said.

He collected the initial samples in August 2010, and the identities of the two wasp species have just recently been confirmed, after comparing them with preserved conspecific specimens from the European collections and also with Leonard and Crosby's types of Gonatocerus ovicenatus deposited at the Cornell Insect Collection in Ithaca. Triapitsyn said the new information will be incorporated into several scientific papers he is preparing for publication.

"For inquiring minds, discoveries can still be made even in urban environments next door to us," Triapitsyn said.