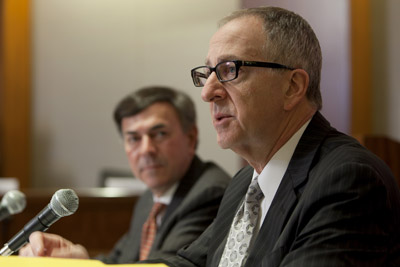 The Cornell University Board of Trustees gave the final thumbs-up for the construction of Bill & Melinda Gates Hall at its March 9 meeting in Ithaca.

Construction is scheduled to begin this month with opening planned for December 2013. The $60 million building will bring together several units of the Faculty of Computing and Information Science in a collaborative working and learning environment.

The board also passed a resolution offering "special praise" to Provost Kent Fuchs for playing "a pivotal part" in the establishment of the CornellNYC Tech -- Home of the Technion-Cornell Innovation Institute. "Kent Fuchs has the deep appreciation and enduring respect of the Cornell University Board of Trustees for his skillful leadership in guiding the university through this complex process and for his stalwart belief from the start in Cornell's ability to prevail," the resolution stated in part. 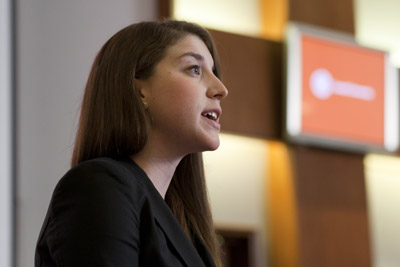 At the board's open session, President David Skorton noted that the university's faculty and students continue to garner national recognition for academic achievement. "I hope you share my pride in these [accomplishments]," Skorton said.

In particular, he cited the election of Christine Shoemaker, the Joseph P. Ripley Professor of Engineering, to the National Academy of Engineering (NAE) for her work on the development of decision-making algorithms for environmental and water-resources problems. This is among the highest professional distinctions for an engineer. Also elected to the NAE were two alumni: Mark Adamiak '75, M.Eng. '76, and Amit Singhal, M.S. '95, Ph.D. '97. 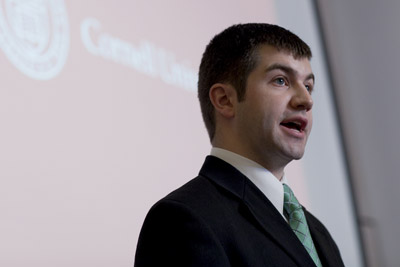 As it does every March, the board invited the presidents of the student assemblies to report on their organizations' work.

The SA has supported the Cayuga's Watchers, an initiative that will train students to recognize and respond to high-risk drinking among peers. The SA has also helped to launch the Bear's Den, a new pub in Willard Straight Hall where activities could include a BYOP night -- "Bring Your Own Professor," Raps said. (Board chair Robert Harrison '76 quipped that the SA should consider "BYOT -- Bring Your Own Trustee.")

The SA has also begun sending a monthly e-mail to all undergraduates and has created a gorge-safety video aimed at incoming students, Raps said.

The Graduate and Professional Student Assembly (GPSA) passed a resolution calling for the creation of an excellence award for faculty mentors, said GPSA President Evan Cortens. It has also been advocating for more professional development to help graduate students thrive whether they remain in academia or leave it, as 40 percent of Ph.D. holders do. The GPSA has seen a sharp increase in requests for funding from student groups, which Cortens attributed to "cost shifting" stemming from the university's efforts to streamline operations. Also, he noted, the GPSA passed two Student Assembly resolutions: one supporting the university's successful bid for the NYC tech campus, and another recommending the board make permanent a schedule to hold elections for undergraduate and graduate student trustees in alternate years. The board passed a similar resolution in January. Elections had been taking place in alternate years for a four-year trial period.