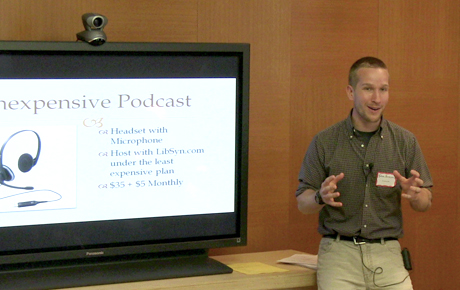 Valerie Walthert is more than a farmer; she’s also a manager, marketer and agrarian advocate.

“One of our biggest challenges is educating consumers, so now, more than ever, it’s key to communicate well and get the right message out there,” Walthert said.

She’s not alone. The role of modern-day farmer has evolved to incorporate much more than tilling the land and raising livestock, prompting the Cornell Small Farms Program to host its first media workshop for farmers, agricultural writers and educators.

Sherry Young drove all day to attend. The editor of the “Small and Beginning Farmers of New Hampshire” newsletter, Young said she appreciated the technical assistance – “within the first five minutes of the first session, I solved a problem that has been nagging me for years” – as well as the opportunity to connect with fellow ag writers.

“It’s just an incredible gift that someone is doing something for ag writers,” Young said. “It’s the journalistic equivalent of going to a spa.”

Although her main audience is the agricultural industry, Young said she often finds herself playing the role of advocate, dispelling myths in a state that doesn’t consider itself agricultural, despite being home to more than 4,000 farms.

“I think ag writers are very important,” she said.

In one session, he explained his “show-and-tell” approach to writing.

“The way to hook people is to show them,” Munzer said. “Show is the chocolate of the article, and tell is the vegetables. We have to eat a lot of vegetables, but a little chocolate goes a long way.”

He said this can be challenging in a world of short Facebook updates and 140-character tweets; being able to quickly capture the essence of a story using concise, descriptive language is key. Visiting sites and having face-to-face interviews can help, he said.

Munzer also encouraged participants to consider their audience and tailor their writing accordingly. An agricultural audience will likely want details about seeds, season or soil, while foodies would rather ruminate on taste, terroir or texture.

“Personally, as a farmer, I like to read about how to make more money, or how to do what I do better,” Munzer said.

One participant whose primary audience is busy farmers said she adjusts her writing to the season – she sends out short reports in summer and saves longer, issue-driven pieces for the winter, when harvest is over.

Walthert, who was raised on a dairy farm and recently returned to farming after working for Cornell Cooperative Extension in Oswego County, said the workshop got her thinking more about ways to use social media to tell her story – and about which stories to tell.

“I think a lot of my day-to-day life is very routine, but for many other people, it is totally foreign and may be fascinating,” Walthert said.

“Good stories are all in the telling. Most farmers and agriculture educators have vibrant stories to share, but because they lack formal training in the art of writing, the narrative doesn’t always shine through,” organizer Violet Stone said. “…  it’s more important than ever to convey the dynamic stories of farming to consumers.”

Stacey Shackford is the staff writer for the College of Agriculture and Life Sciences.